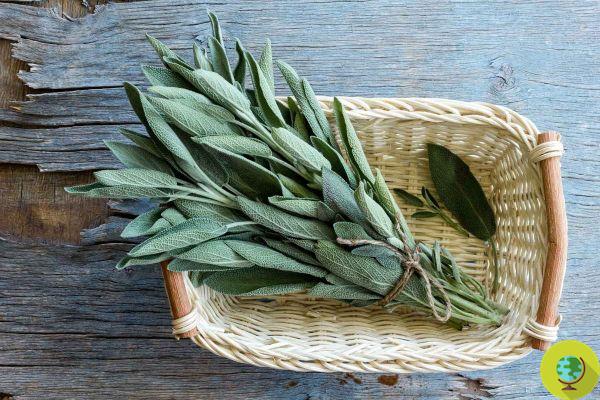 Diabetes is a disease characterized by high blood sugar levels: sage is one of the natural remedies that can help regulate blood sugar.

Il diabetes is a disease characterized by high blood sugar levels: sage is one of the natural remedies that can help regulate blood sugar. Let's take a closer look at what diabetes is and because sage can be useful in controlling blood sugar.


What is diabetes: causes, symptoms and remedies

Il diabetes mellitus - or more simply diabetes - is a disease that involves carbohydrate metabolism. Diabetes is characterized by ipeglycemia, that is, from a high presence of sugar in the blood in the form of glucose.

Glucose is found in abundant quantities in the blood after meals as it derives from the digestion of carbohydrates. Immediately after a meal, the beta cells of the pancreas release insulin, a hormone that allows the cells to internalize glucose and use it for energy. In diabetes there is a malfunction of the mechanism that allows the use of glucose.

Diabetes is distinguished into type 1 diabetes and type 2 diabetes type one diabetes it appears at a young age and is an autoimmune-based disease in which the destruction of beta cells in the pancreas occurs. In type one diabetes, therefore, there is no production of insulin and the only therapy consists in the administration of exogenous insulin. Type two diabetes, on the other hand, is a disease caused by various genetic and environmental factors, including for example excessive nutrition and a sedentary lifestyle, and appears in adulthood.

In type two diabetes there is a resistance of the fabrics toinsulin and a progressive decrease in insulin production by the pancreas.

Among the symptoms of diabetes this includes increased thirst and the amount of urine produced, hypotension and hypovolemia. People with diabetes also show an altered lipid profile, with an increase in circulating triglycerides. The hyperglycemia characteristic of diabetes also causes numerous complications including diabetic retinopathy, diabetic nephropathy and peripheral nerve neuropathy.

Insulin treatment in type two diabetes is required only in the advanced stage of the disease: generally, the therapeutic intervention involves the correction of diet and lifestyle and the administration of hypoglycemic drugs.

A correct lifestyle, a varied and balanced diet, weight control and some natural remedies including sage, they can help lower blood sugar typical of diabetes.

Sage in the prevention of diabetes

La sage (Salvia officinalis) is an aromatic plant that belongs to the Lamiaceae family, widely used as an aroma in cooking and for the treatment of numerous ailments in folk medicine and phytotherapy.

Among properties of sage the antioxidant, anti-inflammatory and antibacterial action are included. Sage also has positive effects on memory and on disorders related to the menstrual cycle and menopause.

As far as the 'hypoglycemic action of sage, the mechanisms of action hypothesized from the in vitro and in vivo studies are the inhibition of gluconeogenesis by liver cells and the decrease in insulin resistance through stimulation of the PPARγ receptor.

La sage's ability to lower glucose levels in blood has been demonstrated in several in vivo studies in mice and the results have been confirmed in human clinical studies.

In a study of 40 patients with type two diabetes, the intake of extracts obtained from sage leaves was shown to be effective and safe in lowering blood sugar and improving the lipid profile in treated patients.

Another study confirmed similar results in a larger number of patients, showing a reduction in blood glucose in the postprandial phase.

Finally, a study conducted on a diabetic animal model made it possible to compare the effect of a sage extract with an antidiabetic drug showing an improvement in tissue sensitivity to insulin, inhibition of lipogenesis and reduction of inflammation.

This steak is not made of meat, it does not pollute and does not come from intensive farming ❯