How to defend ourselves from those who always criticize us 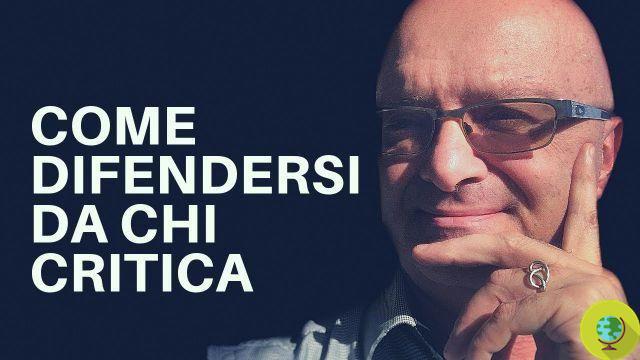 How to transform every criticism received into an opportunity for constructive growth.

Whatever the reason, receiving criticism is never too much fun (it also depends on your age, of course, on who gives it and how you do it). Sometimes the criticisms, especially if repeated, can be annoying, almost unbearable, so much so as to corrode our mood, undermine our self-esteem and our sense of self-efficacy. Or they can become something else: and thus turn out to be absolutely precious, useful.


In fact, whether it is appropriate or wrong, every criticism represents a personal job opportunity. In this sense, the first useful data to be noted is how much it "hurts" us: a little, a lot, not at all. This is no small information: in fact, no one can offend us if something of us does not allow it. In other words, no criticism can "touch" us if it does not find the right ground in us.

The words of others hurt for one reason only: they resonate with our “something”, they touch a “nerve” perhaps not so well known but already discovered, or weak. They painfully confirm this (for example a negative self-judgment, an unresolved lack, insecurity, fear, lack of esteem, a sense of inability, inadequacy on some level). Here is theimmediate gift of any hurtful, hurtful criticism we receive: it forces us to see the annoying areas that live in us, those that require our commitment and active work of growth of conscience and constructive transformation.

So although (perhaps) twisting our noses (at least initially), we can also thank in our hearts those who expressed it to us: they did us a favor. Reaching this awareness, first theoretically and then also internally, emotionally, will represent a nice reversal of position and greater inner strength.

We come to the second step. After the impact with our internal emotional world, it remains to be considered the "content" of the criticism receipt: is constructive, destructive or manipulative?

To be constructive it should contain:

If these elements are not present, the criticized situation is only in reality the pretext for venting irritation, personal dissatisfaction, the desire to bully or control others. How to answer? Without getting defensive and getting into squabbles that lead nowhere, avoiding an aggressive tone and without falling into the opposite side of suffering passively, with all the additional frustration that can ensue.

The right answer lies in one assertive dimension, in a new space of action, the only one possible to proceed with "constructive management" of criticism.

Is the observation correct? Then it is important to know admit the error or the "disputed" fact. It is often a liberating act: it is no longer necessary to climb mirrors or hide behind justifications; it returns a constructive self-image; "Disarms" the possible hostility of the critic. To err is human, and only those who do not do not risk making mistakes.

Observation is alone an opinion different from his own, in terms of values, cultural? If we are comfortable with ourselves and with what we do, we can welcome differences of opinion and criticism. If there is something constructive you take it, otherwise everyone has their own way.

If instead the observation were generic, not referring to a specific situation or moment (for example: "you are always late!"), they can ask for more details. If the intent of the criticism is constructive, it will thus be possible to have information on how to improve, make a certain action, a certain behavior more functional or appropriate. If, on the other hand, the intent were manipulative or destructive, the interlocutor is forced to pass from vague to specific facts and situations, forcing his hostility into embankments that can be useful to both (for example, if the criticism were: "you never do what I ask of you ", one could reply:" can you give me a specific example of when I did not do what you asked for? What, precisely, you would have wanted me to do and I did not ") for a constructive comparison based on objective situations.

In these cases, if in the end the consideration that emerges corresponds to the truth, one can admit the error or use the so-called fog technique, that is to consider the point of view of those who criticize without necessarily changing their own (for example: “I understand that you think that on that specific occasion I did not do what you asked me but…).

“It doesn't matter where the other person goes wrong, because we can't do much there. It is interesting to know where we go wrong ourselves, because something can be done there, ”wrote Carl Gustav Jung. In summary: every criticism helps us to understand if and where there is something about us that needs to be taken into consideration. The critic - be it right or "bad" - is the "teacher" that life offers us, in that moment, to see him. Knowing this, we can smile at it and make good, wise use of it.

10 wise tips to face (and overcome) the difficulties of life

How to defend yourself from manipulators and liars ❯