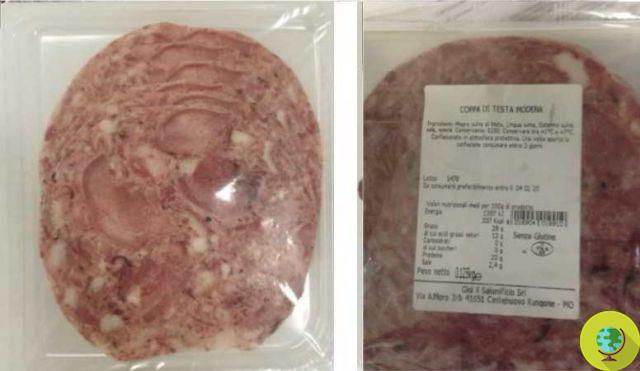 New food alert. The "Coppa di Testa" of Salumificio Monsano (AN) was contaminated by the Listeria bacterium. According to the Marche Region, 13 people were affected by listeriosis and even two victims


New Alert food. The "Head Cup”Of Salumificio Monsano (AN) was contaminated by the bacterium of Listeria. According to the Marche Region, 13 people were affected by the listeriosis and even two le victims.

Suspicion also confirmed by the Ministry of Health, according to which the cases of human Listeriosis occurred in the Marche and Umbria regions are caused by the same strain of Listeria monocytogenes found on the suspect food sample of the Monsano cured meat factory.

The product in question is the coppa di testa produced by the cured meat factory. The latter indicated i lots which may show microbiological contamination by Listeria monocytogenes. It is about:

The withdrew the product from the sale and invited those who had purchased it not to consume it and to bring it back to the point of sale for exchange or refund.

"The investigations made it possible to highlight that the increase in cases was caused by a specific strain of Listeria isolated, up to now, in 13 patients, who have an average age of 72, 12 of whom had debilitating diseases or conditions or were on drugs that reduce the immune response. Among these already debilitated patients have been registered in recent months, two deaths. The epidemiological and microbiological investigations carried out so far have indicated, for one of the 13 human cases, a meat-based food, called "coppa di testa", the production and distribution of which was immediately blocked as a likely source of infection. precautionary ”the Region said.