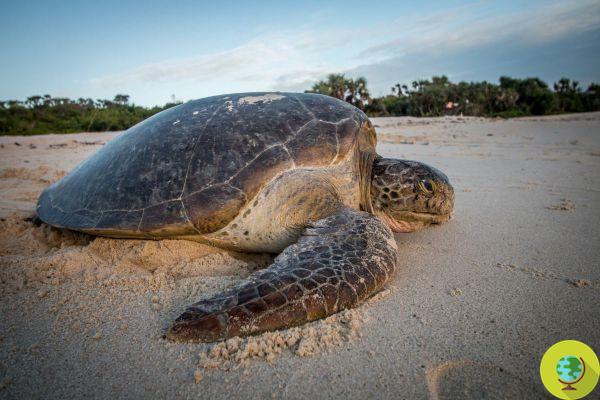 The toxicity of turtle meat would derive from the ingestion of a toxic alga, whose poison is deposited in the animal's body

The toxicity of turtle meat could derive from the ingestion of a toxic algae, the poison of which is deposited in the animal's body


Seven people, including a small child, have died and three others have been hospitalized after consuming poisonous turtle meat on Tanzania's Pemba Island. In addition to them, 38 people ended up in hospital over the past week for ingesting poisoned meat. While all of these people share the fact that they consumed turtle meat in the hours leading up to poisoning, it is still unclear what the exact cause of the meat poisoning is, which is why local health authorities are now analyzing samples of the meat. animals.

Although it may seem strange, it is not uncommon, along the coasts of Tanzania and the island of Zanzibar, to use turtle meat for the preparation of delicious dishes. On some occasions, however, this ingredient can give rise to a severe form of food poisoning called chelonitoxicism: at first, the intoxication can cause symptoms such as diarrhea, vomiting and difficulty swallowing, but then develops through heavy bleeding and necrosis. in the liver which can even lead to death. Additionally, intoxication can have neurotoxic effects that cause neuronal degeneration and damage to various organs. Unfortunately, there is still no antidote to this poisoning, and full recovery can take weeks.

But why does turtle meat become toxic to humans? It is possible that the poisoning is due to the turtles feeding on toxic algae, which accumulate in the animal's body until it becomes poisonous.

The president of Zanzibar, Hussein Ali Mwinyi, entrusted his emotion for what happened to a Tweet:

Died at two weeks of herpes, that's why babies should never be kissed  ❯

add a comment of Deaths from turtle poisoning: seven victims in Tanzania