What Happens to the Brain When We Give Up White Sugar? 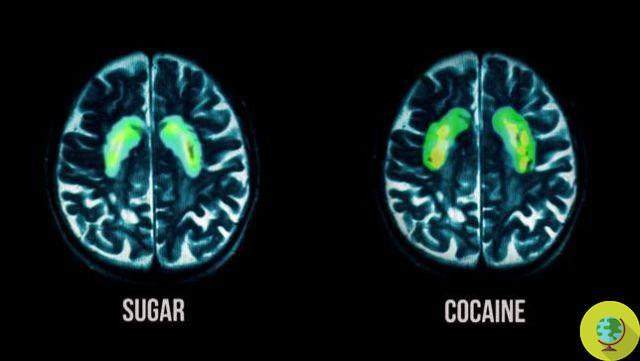 Excessive consumption of refined sugar could lead to a real one dependence. But what happens when we drastically reduce our consumption of added sugars?


Natural carbohydrates and sugars, such as those found in fruit, are essential for our body and metabolism, but the common Western diet prompts us to consume excess sugars, with particular reference to white sugar and in general ai added sugars present in packaged products.

Food is a "natural" reward for our body, as is the desire for sweet. We can easily satisfy ours craving for sweet thanks to the fruit that nature offers us in abundance, but in reality we are mostly used to turning to very different products, in which the sugar content can be much higher than the real needs of our body.

That's why, for example, has been calculated that the average American consumed already 10 years ago 22 teaspoons of sugar added per day, equal to 350 extra calories. This quantity could have even increased since then but it makes us understand the food situation in which we were and we find ourselves.

solo a few weeks ago in Great Britain it has been estimated that the average citizen hires well 283 teaspoons of sugar per week. Refined sugar is thus considered a sweet poison that is ruining our health because it is part of our diet in truly disproportionate quantities. It would be enough to check how much added sugar a fizzy drink, an industrial fruit juice or a packaged snack contains to understand how much our diet is rich in this much-discussed ingredient since childhood.

Nowadays it is almost impossible to come across processed and processed food products with no added sugar, for reasons of flavor and conservation. These added sugars are sneaky and unbeknownst to many of us they would be behaving like real addictive drugs. like nicotine, alcohol or cocaine. Here then consequences such as difficulty in giving up sweets, weight gain up to obesity, tooth decay, cardiovascular problems, diabetes.

Recent studies suggest that excessive consumption of refined sugars and added sugars in general is able to act on the brain creating a real addiction. Just like drugs, sugars would be capable of causing a release of dopamine and to act on some important receptors in the brain.

READ ALSO: 5 Commonly Used Refined Ingredients That Are Poisoning Us

Repeated sugar intake would lead the brain to increase your sugar needs to achieve the effect of an ever higher release of dopamine. Currently this type of study has been conducted on rodents, but it is hypothesized that the same primitive processes also occur in the human brain.

Excessive consumption of refined sugar could also have among its own consequences trough and impulsive behavior. It is about issues still to be explored which, however, make us reflect on the neuro-chemical basis of sugar addiction. It seems that to be able to abandon sweets and the habit of adding a few teaspoons of sugar to sweeten coffee or herbal tea you need a commitment of at least 40 sugars. After that, all the sweet foods and drinks that you previously consumed without problems every day will probably appear "too sweet" to you. And you will have to rebuild your "tolerance" for sugar, as has happened to Andrew, a candy-loving boy who tried to drastically reduce his consumption of white sugar and added sugars.

Think that give up adding a few teaspoons of sugar your favorite hot drinks is too difficult a challenge? Perhaps it does not depend only on a matter of taste but also on the dependence that the added sugars could cause in our body.

Read also:
Refined sugar: 10 scientifically proven reasons to limit its consumption
Sugar: More than fat, it is addictive and leads to binge eating
Sugar? As toxic and harmful as smoking and alcohol

What happens to the body by drinking apple cider vinegar every morning? ❯

add a comment of What Happens to the Brain When We Give Up White Sugar?