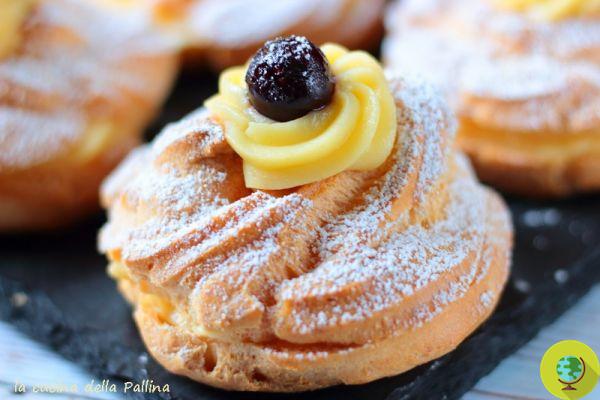 March 19 is Father's Day and if in the past we had proposed the recipe in the vegan version of the Bigné di San Giuseppe, this time we suggest that of the Zeppole. Typical desserts of the Neapolitan tradition usually fried, they can also be prepared in the oven to make them lighter, and by eliminating from the original recipe ingredients of animal origin, the Zeppole di San Giuseppe will certainly be a welcome gift for every type of dad, with a single character actor though .. he is greedy!

March 19 is the Father's Day and if in the past we had proposed the recipe in vegan version of the Bigné di San Giuseppe, this time we suggest the one of zeppole. Typical desserts of the Neapolitan tradition usually fried, they can also be prepared in the oven to make them lighter, and eliminating from the original recipe ingredients of animal origin, Zeppole di San Giuseppe they will certainly be a welcome gift for every type of dad, with a single character actor, however, who is greedy!

Ingredients (for about fifteen donuts)

Let's start preparing the custard: put the flour and ½ cup of soy milk in a bowl. We mix with a whisk and let it rest. In another bowl pour the remaining soy milk, sugar, a pinch of salt and mix very well, always helping with the whisk. At this point we add the mixture of flour and milk, obtained previously and mix everything, paying attention to the lumps. Pour into a saucepan and over very low heat, mix for at least 5-6 minutes until the mixture thickens and, always continuing to mix, add the other ingredients: vanilla and lemon zest. We continue to cook for another minute. Remove from the heat and pour the cream into a glass bowl covering it with a cloth and let it rest in the fridge to cool.

Now the time has come prepare the donuts: in a saucepan pour the water, oil and a pinch of salt. Bring to a boil and as soon as the water boils, remove the pan from the heat. At this point add the flour, a little at a time and mix well, avoiding forming lumps. After obtaining a compact dough, put the saucepan back on the heat, very low, and continue to mix while continuing to cook for a couple of minutes. Turn off the heat and add the sugar and yeast, always stirring. Let the mixture cool and add the lemon zest and cornstarch (gradually), always continuing to mix.

We pour some of the dough into a pastry bag (also made by you with paper) and squeeze on a well-oiled pan forming two rounds, one on top of the other. We leave a distance of at least 2-3cm between one wedge and the other. Once all the dough is finished, put our donuts in the oven and let them cook for at least 30 minutes, until they are golden brown.

Once cooked, take the donuts out of the oven and let them cool.

Meanwhile, fill the pastry bag with cream. Cut the discs we obtained in half and fill them with cream. Close, place a sour cherry on top of each donut, garnish it again with a little cream and sprinkle with icing sugar to taste.

Happy Birthday to All Dads

Read all of ours vegan recipes

Read all the recipes of vegan sweets

Zeolite: everything you need to know before using the chelating mineral that cleanses the body of heavy metals ❯