What happens to the body by drinking apple cider vinegar every morning? 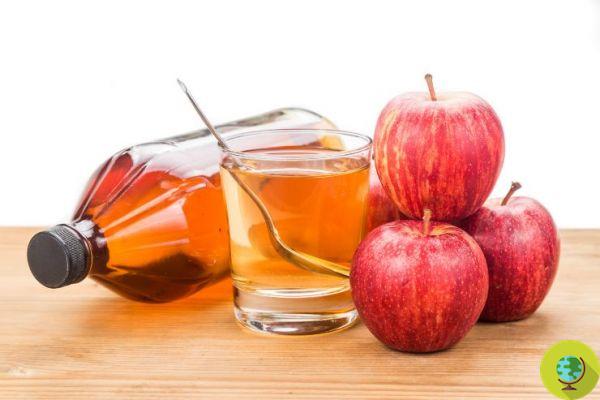 
Probably many of you have the habit of drinking lemon water as soon as you wake up but only a few have tried (it takes a little courage) to start the day with apple cider vinegar! She wanted to do this experiment, taking it a bit as a challenge, Rachel Lapidos who drank for a week a little vinegar obtained from apples to see if this drink, taken first thing in the morning, could be somehow beneficial for the body as they say.

Despite the strong taste and not everyone likes it, apple cider vinegar is known to have several properties: it facilitates digestion, deflates, improves the appearance of the skin, is anti-inflammatory, antibacterial, alkalizing, diuretic, helps the immune system, has satiating power and much more. In short, it is a food with therapeutic value which, not surprisingly, is often used by natural medicine.

HOW DID IT GO?

It was tough at first: early morning apple cider vinegar it is not quite the taste that a person wants to taste as soon as he wakes up and gives a burning sensation to the mouth. The instinct is therefore to follow the intake with plenty of water.

The next sensation that Rachel reports is that of the action inside the body: a sort of burning that goes from the throat to the stomach. Normal? No! The woman is indeed fell into a serious mistake: he drank a glass of pure vinegar, a dose that is not only excessive but also too strong as it is not diluted in water.

Realizing the mistake, thanks to the consultation with a nutritionist, Rachel corrected the shot and from the following days she diluted a smaller dose of vinegar (1 or 2 tablespoons) in a cup of water continuing to drink it every morning without having any more discomfort, on the contrary ...

BENEFITS AFTER A WEEK

After a week of taking vinegar diluted with water, Rachel notices first a much more deflated belly but also a greater load of energy than usual as well as a more contained appetite that allowed him, for example, not to have an afternoon snack.

Also the appearance of the skin was visibly improved, it was in fact more toned and luminous but in addition to the vinegar the woman regularly drank more water than usual to dispose of the acidity and taste left in her mouth. Therefore, at least in part, this advantage could be attributed to the greater income of liquids.

Rachel she has been fine all week but as soon as she stopped with the vinegar she caught a cold. Maybe a simple coincidence but in order not to make a mistake and since after all this simple practice did not bother her then she too much she decided to continue ...

Continuously drinking too much vinegar, given the high degree of acidity of this food, could cause damage to tooth enamel but also digestive problems and burning of the esophagus. We therefore advise you, if you want to experiment with this natural remedy, not to continue taking it for more than 15 days, if anything, repeating the treatment in cycles. Evaluate the reaction of your body but if you notice burning and discomfort stop immediately. In case you have health problems or take medications, avoid doing it yourself e always seek the advice of your doctor.

What happens to our brain before we die and what is our last thought? The answer in a study ❯

add a comment of What happens to the body by drinking apple cider vinegar every morning?