Sunions: the new onion that doesn't make you cry when you cut it

The first tearless onion is coming from the United States, the result of a series of crosses developed by the synergy of scientists and farmers.

The first tearless onion is coming from the United States, the result of a series of crosses developed by the synergy of scientists and farmers.


Cutting onions makes you cry and can be a very annoying thing while cooking. Here then she was born Sunions, a new onion that eliminates the problem at the root and avoids tears!

Scientists and farmers have been working for decades to make a good onion that doesn't make you cry. The new vegetable, the result of a natural crossbreeding program implemented in the United States since the 80s, was called Sunions and promises to be a sweet and delicate onion, smaller and crunchy than the traditional ones and that does not leave that strong and strong aftertaste. pungent. Of course, what it stands out for is above all the fact that it does not irritate the eyes in any way when cutting.

For the uninitiated when we cut normal onions we allow them to release a volatile compound, the alignase and gases that form sulfuric acid when they come into contact with the water present in the eyes, creating irritation and stimulating the production of tears (natural defense of our body to potentially harmful external substances). Generally the older the onions are, the more you cry. The new onion, on the other hand, considerably lowers the presence of the offending volatile compound. 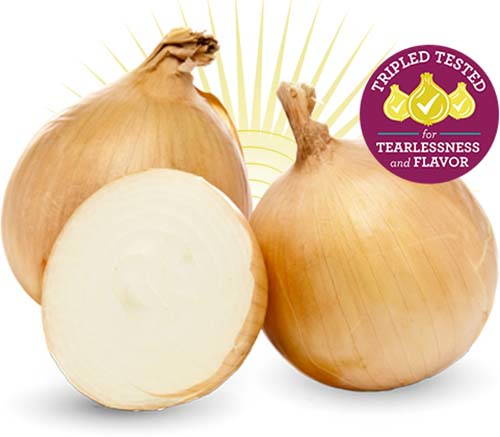 Interestingly, even though the Sunions were marketed as the world's first tearless onions, in fact in 2015 the Japanese company House Foods Group had already created an onion that didn't make you cry by artificially eliminating the compounds that these vegetables release in the moment. in which they are cut. However, in that case the onions had been irradiated and this detail had undoubtedly kept many consumers away. This time, however, the innovative onion was made without making any genetic changes.

Sunions onions are currently only produced in Washington and Nevada, and although sales have started nationwide in the United States as early as December, they are still relatively unavailable on store shelves and supermarkets. However, the company that produces them (which is Bayer) has plans to expand the spread of the vegetable in the United Kingdom soon.

Did we really need it? Will the new onion that doesn't make you cry also reach our latitudes? In the meantime, here are some simple tricks to peel traditional onions without crying:

add a comment of Sunions: the new onion that doesn't make you cry when you cut it