We explain why you shouldn't eat salmon at Christmas 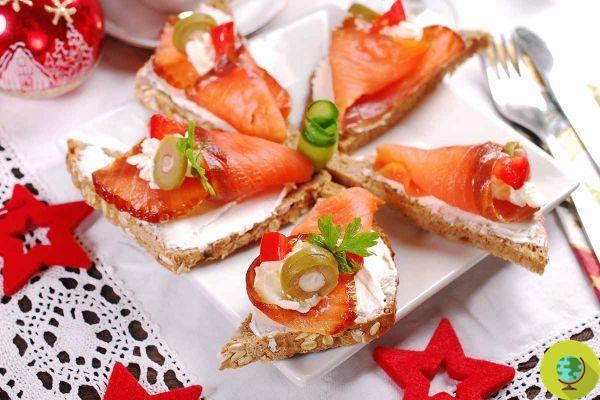 At Christmas, salmon is often on our tables but, aware of the unsustainability of its production, we should do without it

Salmon is one of the most loved and consumed products during the Christmas holidays, but often while enjoying our appetizing canapes or a good salmon tagliatella we forget what is behind the production of this food. Here then, perhaps, with a little more awareness we could decide to do without it.


Whether it's smoked, a fresh fillet or in oil, salmon is one of the undisputed protagonists of the holidays. In fact, between Christmas and New Year, the consumption of this food grows exponentially. But, taken by the euphoria, we perhaps forget that it is an extremely unsustainable product for several reasons.

Just a few days ago we told you about a recent test conducted in Germany in which producers of different brands of smoked salmon were asked to present evidence regarding the welfare of animals on farms or the conditions for fishing and killing of salmon in the case. than the wild one. Read also: All the unsustainability of smoked salmon in the new German test: not even the wild one is saved

Well, what has emerged, in reality only a confirmation of what has already been known for some time, is that salmon in farms often live in dramatic conditions, all piled up and easy prey for disease (many die before reaching the appropriate weight to be able to be slaughtered).

Atrocities that have also been documented. Also read: First film the atrocities behind the salmon that ends up in your sushi

Wild salmon, which have at least enjoyed a free existence, after being caught are transported alive on boats before being cruelly slaughtered without any stunning or anesthesia.

Farms are a danger to environmental sustainability

Farms, in addition to being cruel towards fish, also have a strong environmental impact. In fact, they contain plastic waste, iron, nets, chemicals, antibiotics as well as thousands of dead fish that end up in the sea.

Furthermore, when farms arise in places unsuitable for the growth of this species, they are a serious threat to the ecosystem of the territories and risk dramatically unbalancing the marine environment.

For all these reasons there has been a nation that has banned salmon farming, it is Argentina. Read also: Historical law in Argentina: salmon farms banned. It is the first country in the world

As the demand for salmon is increasing from all over the world, a company has also begun to raise them "on the ground". It is located southwest of Miami in Florida and wants to become the largest producer for the United States. In this establishment large well-chilled water tanks have been placed where 5 million fish live completely outside their natural habitat.

Read also: And so we started raising salmon "on the ground" that end up in sushi ...

Salmon exploited to produce feed for other fish

In recent years, salmon production has grown tremendously, notably due to the popularity of sushi but also for other reasons. You may not know that salmon on farms are also used for the production of fish meal and oil, of which about 70% is then used in fish farms.

Read also: Sushi mania causes salmon production to explode around the world (and the damage is incalculable)

Farmed salmon does not have naturally pink flesh as fish do not have the ability, like free-living ones, to feed on shrimp and krill which contain carotenoids and naturally give it that color.

To compensate for this, the farmers feed the fish astaxanthin, a substance capable of transforming their flesh which would be white to pink. All just to meet consumer expectations.

Also read: The secret of farmed salmon, fed with chemicals to turn pink

The risks of raw or smoked salmon

Raw fish, regardless of whether it is salmon, tuna or other varieties also present in sushi, if not fresh, quality or well preserved, can pose risks to our health. And even smoked salmon, fortunately rarely, can be contaminated. We have repeatedly reported food warnings concerning this food, which was contaminated, for example, by listeria.

Considering all these aspects, perhaps we could also orient ourselves on other foods to properly celebrate Christmas and New Year.

Tik Tok, beware: any child could fall into his own dangers. The advice of the psychologist ❯