This restaurateur gives leftover food every evening to those in need

Francesco Fabiano, owner of the French pizzeria in Cecina, leaves packages with leftover food every evening for those who need it on the tables outside

His name is Francesco Fabiano and he is the owner of the French pizzeria in Cecina. Every evening he leaves some packages outside the room with what is left over from the evening, the food is available to those who need it most.


Food waste is today more than ever unacceptable, many have understood this and even restaurants and clubs are adapting to make sure to throw away as little food as possible (better nothing).

Fabiano's idea is not new, even if it is not yet widespread: pack up leftovers every night to donate to people who cannot buy enough food, thus obtaining the double advantage of not wasting and helping those in need.

Initially, people had to go to collect the leftover food directly from the pizzeria but, as the restaurateur told Il Tirreno, this created some discomfort:

“I noticed that every day, at the end of the service, there is always something left over and it is really a shame to throw away all this food, since there are so many people who are unable to feed themselves. Some time ago I collected leftovers and gave them to those who came to pick them up directly from the pizzeria. However, this method didn't work very well. In fact, I noticed that people were ashamed to show their state of need ”. 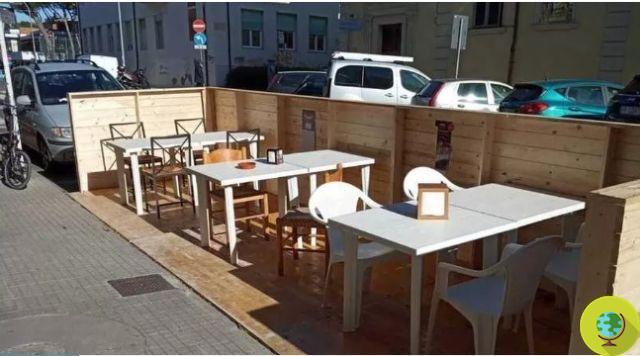 Since that time he has decided to leave the packages at the end of the evening on the outside tables of the club, so that people could collect them anonymously. Depending on how many leftovers are left, every evening the packets are in different numbers (one or more), inside there are pizzas, flatbreads and bread.

In this way, the generous gesture of the restaurateur from Cecina is bearing fruit, the word has spread (Fabiano has also warned the local parish) and every evening the leftovers "disappear" to the delight of those who can finally eat a hot meal for free. .