The bike is good for the brain and for the eyes 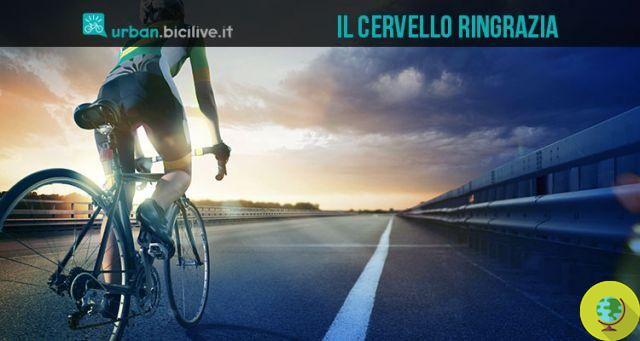 Cycling is good for your health. We have known this for some time but a new study has discovered that playing sports and pedaling in particular is also good for the eyes


Go to bike is good for health. We have known this for some time but a new study has found what to do sports and in particular pedaling is also good for save.

To find out was a research conducted by the In-Cnr of Pisa and the University of Pisa and published in Current Biology. According to the analysis, the plasticity of our brain can be greatly enhanced by pedaling.

It is now established that exercise is good for our muscles and cardiovascular system, making us more resistant to diseases related to aging. But it was not known whether and to what extent carrying out motor activities could also act on the processes of plasticity cerebral, that is, the ability of the brain's circuits to adapt in response to stimuli environmental.

And that's what the researchers worked on Alessandro Sale of the Neuroscience Institute of the National Research Council (In-Cnr) of Pisa e Claudia Long of the Department of Translational Research and New Technologies in Medicine and Surgery of the University of Pisa. The two scientists focused on our visual system, studying a specific phenomenon called rivalry binocular.

“When our eyes they see two different images, the brain goes into confusion and, to get out of the impasse, it now favors one and now the other of the two signals ", explains Salt. "So if contrasting stimuli (for example, lines oriented in a different way) are sent to the two eyes of a subject, he will report a continuous alternation of the two images, which will be perceived for a time duration that is a function of the strength of the eye to which stimulus is presented ".

The duration of this perception is an index of the plasticity of the adult visual cortex: “We have shown that if the dominant eye is closed for about two hours, the stimulus projected to the eye that was closed will be perceived for a longer time. In practice, closing one eye does not weaken the strength attributed to the signals sent to it, on the contrary it strengthens it ".

All of this underpins the new research, which examined the plasticity of the brain when exercising. The researchers tested the effects of two hours of bandaging of one eye on 20 adults in two different conditions: in one the subjects were seated and in the other pedaled on an exercise bike.

Le differences they were evident. The subjects who exercised had much more marked effects than the monocular bandage, with a notable enhancement of the response to the stimuli presented to the eye that had been closed.

The results may provide new solutions in the treatment of a very widespread disease known as lazy eye or amblyopia. In this case, exercise could help stimulate visual plasticity in a natural way.

“This study represents the first demonstration of the effects of motor activity on the plasticity of the visual system and leads us to view exercise not only as a healthy habit, but also as a help for the brain to stay young”Conclude the researchers.

How to blame them?

5 TIPS FOR CYCLING IN WINTER

WALKING: 10 REASONS TO DO IT AT LEAST 30 MINUTES A DAY