If finding a hair in the salad or a gnat in the soup would have prompted you to immediately leave the restaurant you had chosen for your dinner, not without first mentioning what happened to the owners, how you would have behaved in the face of the discovery of bodies. strangers far more disgusting, as well as potentially dangerous, inside a ready meal, a bag of chips or in the hamburger ordered at the fast food restaurant? We present the ten most alarming cases of poor hygiene and attention in the preparation of meals, which unfortunately have almost always been unsolved.

If you find a hair in the salad or gnat in the soup would have prompted you to immediately leave the restaurant you had chosen for your dinner, not without having first reported what happened to the owners, as you would have behave in the face of the discovery of much more disgusting foreign bodies, as well as potentially dangerous, in a ready-made meal, in a bag of chips or in the hamburger ordered at a fast food restaurant?

We present the ten most alarming cases of poor hygiene and attention in the preparation of meals, which unfortunately remained almost always unsolved.

This is the most recent case and has hit the headlines in the last few days. To Hunan, in China, a nine-year-old boy found one really disgusting surprise in his portion of chicken wings ordered from McDonald's. The boy and his parents saw that he was about to taste small crawling larvae coming out of lunch and immediately asked the staff for explanations, who refused to either answer or offer an apology. The necessary investigations to clarify the incident are already underway.

A patch in the fries

The best known chain of fast food of the world is unfortunately not new to strange and disgusting finds. The case in which a woman named Heather O’ Neil, a Massachusetts resident found a bloody patch inside his portion of potato chips ordered at a fast food chain in the city of Bourne. It seems that even in that case the restaurant managers refused to provide the necessary apologies and explanations.

A knife in the sandwich 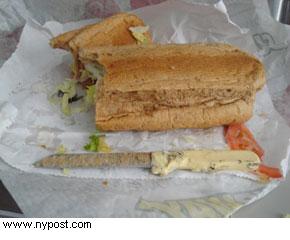 This time the protagonist is another US fast food chain, called Subway and famous for its sandwich. In July 2008, the twenty-six-year-old designer John Agnesini would have discovered, after biting into his sandwich, the presence inside it of an 18 cm long knife. It seems that the young man has never received any plausible justification for the incident from the managers of Subway.

A chicken head in Happy Meal 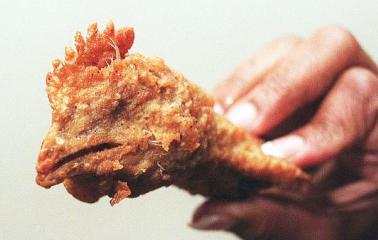 Here is a third case to report regarding Mc Donald’s. This is the discovery that took place in the United States in 2008 by a mother who had ordered two menus for her daughters Happy Meal. Among the well-known chicken nuggets, however, one of them had an unexpected shape. It was one breaded and fried chicken head just as if it were a common croquette. No one was able to explain why it was found in one of the menus intended for children. It seems that the managers of the fast food restaurant offered the woman two weeks of free meals, but that she immediately requested a refund of 100 dollars.

The US chain Cracker Barrell would periodically withdraw burgers from menus at 557 restaurants in 41 states after a customer at one of the Myrtle Beach outlets in 2007 he suffered from injuries to his mouth right after he bites into the burger he ordered. It would have been one to cause what happened razor blade or a sharp object of a similar nature.

In July 2008, an English woman, mother of twins, spotted the presence of metal objects in a ready-to-eat meat dish she had purchased at one of the Tesco stores in her hometown of Southwick. The woman had already served portions of the meal to both herself and her two twenty-two-month-old daughters when she noticed the presence of a metal part, similar to a bullet, in the bite she was about to ingest. Tesco apologized to the woman, labeling the incident as an extremely rare event.

A condom in the fish soup

In 2004, a California woman got a nasty surprise after ordering a fish soup at one of the McCormick & Schmick's restaurants. The woman would have noticed, after a couple of spoonfuls, of the presence in the soup of a strange object rubbery consistency, which he had previously mistaken for a squid. It was a condom. The owners of the restaurant would not have been able to provide plausible explanations for what happened.

Nails in macaroni and cheese

The ready meals from the British store chain Tesco are once again protagonists. In one of the “Macaoni Cheese” packs of pasta with cheese, a 21-year-old girl named Rebecca Shorten in 2008 would have found three nails with a length of 2,5 centimeters and would have inadvertently ingested one. Tesco would immediately collect the product from its stores.

A mouse in the bag of chips

A sixty-six-year-old man in 2007 allegedly found an unwelcome surprise in pack of barbecue chips with the Frito Lay brand that he bought to indulge in a snack. In fact, a mouse emerged from the bag in the most unexpected way, whose journey to reach the package has never been clarified.

When Michael Snyder went to the "When Pigs Fly" store in Somerville, Masachussetts, to purchase a portion of cinnamon and raisin bread, he never expected that it had been prepared with the addition of an unpleasant ingredient: pebbles. It has been thought probable that they could have somehow been mixed with the raisins used for the preparation of the bread during the process of its drying.

The 12 best herbal teas for colds and flu ❯