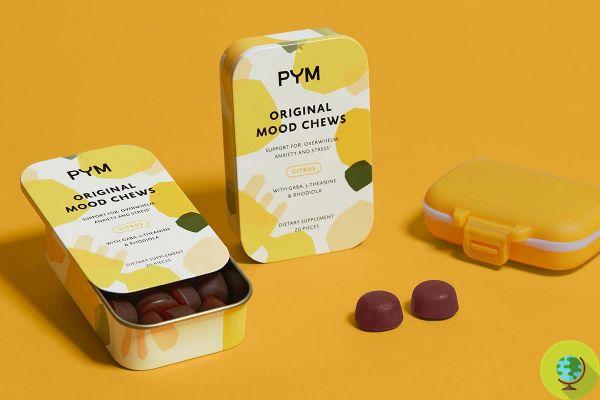 Zak Williams, Robin's son, has launched a natural supplement against anxiety and stress, problems that he himself knows well

Unfortunately, the Williams family is very familiar with problems such as depression, anxiety and poor stress management. Not only the unforgettable Robin but also his son Zak said he had various mental health problems for most of his life. To help many people like him he decided to launch a natural supplement.


It is a product that looks like a gummy candy and that is called PYM (Prepare Your Mind) Original Mood Chews. The name is an indirect homage to Robin: Pym is in fact the middle name of Zak chosen by his father "because he sounded 'vaguely Welsh'".

Zak had anxiety problems in his teens and post-teens, which led to him having full-blown panic attacks. During this time he had experimented with various solutions but without success.

When his father died by suicide (lately it is believed that the well-known actor did not actually suffer from depression but from an undiagnosed Lewy body dementia) his nervous system collapsed again. As he said:

“I was diagnosed with PTSD and my stress and anxiety levels have skyrocketed. I started using alcohol to manage my anxiety; it didn't work too well. And cannabis made the anxiety worse "

From that moment of great crisis and despair, however, the boy managed to re-emerge and, all his experience and the attempts made to get better, led him to test formulations of amino acids and other natural compounds against anxiety.

This is how PYM was born, the citrus-flavored chewable supplement that contains neurotransmitters, amino acids and the adaptogens GABA, L-Theanine and Rodiola, combined together to create a sort of quick and easily assimilable remedy for anxiety and stress.

"With this product we are introducing, we want to provide a foundation for mental health support," ZaK said.

Naturally, the composition was created with the support of a scientific advisory committee which also includes Dr. Raghu Appasani, a psychiatrist, who said about the new supplement:

“I see PYM as something you could easily incorporate into a healthy lifestyle. It's like brushing your teeth or taking a shower, but it's mental hygiene "

As Olivia June, co-founder of the product and Zak's wife, added:

"You can treat it like a vitamin and take it at the beginning or end of the day, or use it as a pain reliever if you anticipate anxiety or are overwhelmed"

The new product generally seems to work but, the creators themselves admit, it is necessary to experiment with it on a larger scale, and for this purpose a real study is about to start:

“We worked with friends, family and a dense network of around 30 people who took the prototypes. We wanted to get initial validation in this regard. It has worked for almost everyone. We will now follow a more formal clinical trial in the coming months, using control groups and working with 400 participants, ”Zak said.

Zak and his team are keen to point out that the PYM is only part of a larger lifestyle change, which could include meditation, mindfulness activities, a healthy diet and physical activity.