The prickly pear is a fruit that, in addition to having countless qualities and beneficial properties - it is rich in vitamins, diuretic, purifying, thirst quenching - has a quality up to now not described and evaluated in the various informative and scientific publications: that of being an excellent remedy against constipation that competes with any other natural or artificial product.

Il prickly pear it is a fruit that, in addition to having countless qualities and beneficial properties - is rich in vitamins, diuretic, purifying, thirst-quenching - has a quality up to now not described and evaluated in the various informative and scientific publications: that of be an excellent remedy for constipation such as to compete with any other natural or artificial product.

The fruit consisting of a juicy and fleshy pulp in which many seeds are immersed, is covered with a peel with thin and minute thorns that can strike terror, but which can be eliminated simply by peeling it with a knife and fork, first cutting the caps and then engrave lengthwise and open as seen in the photo. 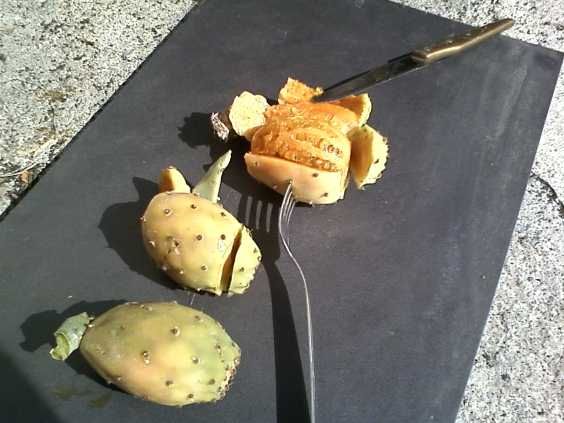 The pulp consists of water, sugars, vitamins and minerals which give life to a mucilaginous substance which concentrates when the fruit is dehydrated. These mucilages produce the same effects of the substances contained in the pulp of plums dehydrated, that is to increase the volume of ingested food, provoke satiety, promote intestinal peristaltic movements, make the path of food in the intestine easier.

I sow with an irregular discoid shape, the size of a mignon lentil, 2-3 millimeters, they account for about 30-40% of the most important and remaining part of the fruit. They perfectly replace the beneficial effects of vegetable fibres that is that of cleansing of the intestinal wall with an easily understood mechanism: the seeds produce a delicate action in contact with the wall of the digestive tract, during the path of food in the intestine, thus eroding the accumulated toxic substances and purifying the intestine, eliminating gaseous fermentations and flatulence.

The fruit must be eaten simply breaking it up or dissolving it in the mouth without breaking the seeds which are quite hard. 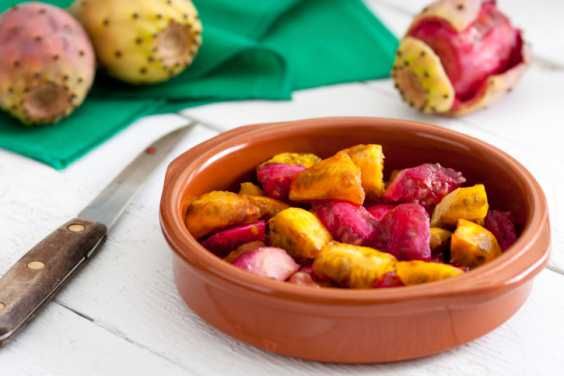 The prickly pear, so it is fresh, but in particular the one left to dry, obviously peeled, is mainly an excellent complete remedy for constipation both for the mucilage concentrate in the dehydrated pulp and for the seeds contained which replace the functions of vegetable fibers very well.

The belief for some consumers, who do not dare to eat the fruit for fear, that it may be denied create the opposite effect that is, the intestinal constipation. This effect occurs in very few predisposed subjects, who have consumed the fruit in large quantities in a single meal, for these subjects the maximum intake of only one fruit per meal is recommended.

From the point of historical view, the first users of the dehydrated or dried prickly pear cactus were our grandparents during the Second World War, after the landing in Sicily of the allies, they appreciated its qualities not as a remedy for constipation, but as remedy for lack of food, the abundance of the fruit served to feed entire families during those periods as well as in the first post-war period. 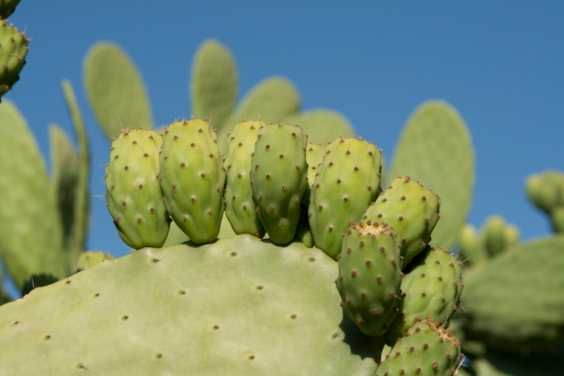 In essence, this product could easily compete with any other food created for the intestinal laxative and purifying function, in addition to various other undoubtedly existing positive effects still to be addressed in scientific research. For this, personally, I would like the marketing of this product on a larger scale, exactly as it happens for plums. Manufacturers and Traders should really carefully evaluate the potential of a new product to be placed on the market which is the dehydrated prickly pear.

From the point of view agro-productive, could be used to dispose of the considerable quantity present in Sicily and in the areas of the Mediterranean scrub that is not even harvested, in particular that of the first flower of the months of August and September which matures rapidly. This would undoubtedly serve to create the development of new industrial activities.

From a production point of view it would become essential to use, after harvesting, the technologies already known for drying or dehydration, storage and packaging of dried fruit similar to plums, to ensure the goodness, health and genuineness of the product to the consumer.

From a commercial point of view it would be very useful to find dehydrated prickly pear on the markets in the periods of the year that go, roughly from January to July when the fresh product is not available, in this way the consumer could experience its beneficial effects for its own organism at all times of the year.

I tell consumers to taste, especially those who have not already done so, the effectiveness of fresh prickly pear, at least for now until there is and if there will be, the dehydrated prickly pear on the market. It is an authentic natural medicine used after main meals in quantities of two or three fruits, try it you will not regret it.

add a comment of The prickly pear: an effective natural remedy for constipation and constipation