Prozac and other drugs hidden in 50 supplements sold on Amazon and Ebay, the FDA alarmed

The Food and Drug Administration (FDA) has unearthed a new scandal involving dietary supplements. The US government agency found hidden drugs inside products sold on Amazon and eBay.


Almost 50 food supplements, sold on the most popular online shopping platforms, were found to be contaminated with active pharmaceutical ingredients, including some prescription drugs, not declared on the label. All of this is obviously illegal and could even pose serious risks to consumers.

The Food and Drug Administration, which regulates dietary supplements in the United States, has warned and raised the alarm.

The FDA has purchased and analyzed a number of weight loss and sexual performance enhancing supplements sold on Amazon and eBay. It turned out that all the products tested contained undeclared pharmaceutical ingredients, potentially dangerous medicines of various kinds.

These include sildenafil (the active ingredient of Viagra), tadalafil (Cialis), vardenafil (Levitra) but also sibutramine, an appetite suppressant, desmethylsibutramine, a sibutramine analogue and fluoxetine (Prozac). 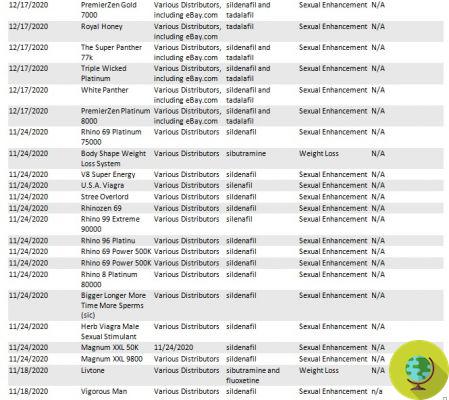 According to federal law, food supplements must accurately indicate on the label all the ingredients they contain and, among these, there can be no drugs.

The totality of the supplements analyzed, however, contained them and this is a real risk for those who buy them, given that they can interfere with other medications or supplements you are already taking but also create serious side effects.

Several products purchased on Amazon were marked with recognition “Best Seller n. 1” o “Amazon’s Choice” which is assigned to "highly rated and well priced products available for immediate shipment". So imagine how many may have been sold.

Among other things, while a spokesperson for eBay told Consumer Reports, the US consumer association, that the company is examining and will remove the products from the site, Amazon, on the other hand, has not yet released any statements.

The FDA has obviously urged consumers to avoid the supplements on the list and has published specific information on each product contaminated with drugs.

Unfortunately, this is not the first time this has happened. Previous analyzes also found undeclared drugs in dietary supplements. An FDA study published in June analyzed the content of 59 bitter orange supplements, finding illegal stimulants in nearly 10% of the products.

In September, researchers at Harvard University said instead that they had found hidden drugs in popular "nootropic" supplements - products that promise to increase brain function.

At the end of 2018, an FDA-maintained database listed 776 supplements contaminated with undeclared drugs. Now that database lists over 1.000.

Among other things, the US government agency is keen to underline that the list includes only a small part of the potentially dangerous products with hidden ingredients currently on the market. In fact, the FDA is unable to test all marketed products. The site therefore warns you to always be careful, to avoid doing it yourself and to always rely on an expert.

Here you will find the specifics of the individual products to increase sexual performance contaminated results while at this link the list and details concerning them supplements to lose weight in which drugs were found.

This would be the best supplement for bigger, stronger muscles according to a new study

Multivitamin and mineral supplements do not bring any benefit to our health. I study

add a comment of Prozac and other drugs hidden in 50 supplements sold on Amazon and Ebay, the FDA alarmed