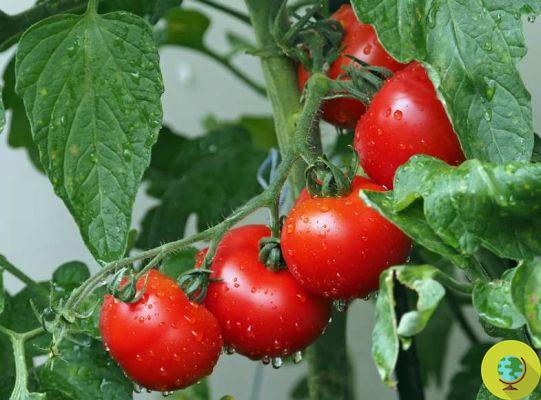 Organic tomatoes. The nutritional differences between organic and conventional vegetables are real, at least as far as tomatoes are concerned. A previous research according to which there are no differences from a nutritional point of view between foods from organic farming and their conventional counterparts appears to be denied.

I organic tomatoes they are more nutritious than traditional ones. It therefore appears, denied, at least as regards tomatoes, one previous search according to which there are no foods from organic farming and their conventional counterparts differences from a nutritional point of view.

Organic tomatoes pile up higher concentrations di Vitamin C, sugars ed antioxidants, when compared with the same foods grown using conventional methods that involve the use of pesticides. The comparison was made by the experts of the Federal University of Ceara, Brazil, under the guidance of Maria Raquel Alcantara Miranda.

Lo study in question was published on the open access scientific portal PlosOne. Within the study, the researchers set out to compare organic and conventional tomatoes from the point of view of weight and nutritional content. Organic tomatoes, despite having a about 40% less weight compared to their conventional counterparts, they have proved capable of accumulate a greater amount of nutrients.

This would be due to the beneficial stress to which organic tomatoes are subjected during their growth, having to face any adverse conditions without the aid of pesticides, as in the case of plants born spontaneously in a completely natural environment. The greater richness of organic tomatoes as regards the presence of vitamin C, sugars and antioxidants, among which we also find the lycopene. The differences are evident by consulting the data reported by the experts in this table.

La greater wealth of organic tomatoes from a nutritional point of view it has been related to the biological response of these vegetables to stress. At the conclusion of the study, the experts suggest that in the cultivation of vegetables, we should not aim to eliminate stress conditions in the hope of maximizing crop yields, but to identify a balance that allows to obtain products with a favorable size and nutritional content.

10 foods that would be better to choose organic

The advantages of choosing organic foods regardless of nutritional value ...

Tomatoes: 10 ways to use it as a beauty remedy