Like thousands of printer cartridges have been wandering the ocean for 7 years, ending up on the beaches of half of Europe

A ship container lost at sea in the North Atlantic has turned into an army of printer cartridges floating everywhere from the Florida coast to Norway, according to a new study. It also appears that the cartridges have deteriorated to form microplastics contaminated with metals such as iron, titanium and copper.


The discovery of thousands of printer cartridges found at sea, from the Atlantic Ocean to Northern Europe, has been accompanied by photographic evidence on social media that once again put the urgent question of environmental protection in the spotlight. from the threat of microplastics. It is hypothesized that the spill into the sea occurred 1.500 km east of New York in January 2014, with the first cartridges found on the beaches of the Azores in September of the same year. Since then, more than 1.500 pieces have been unearthed and reported on social media - the largest quantities along the coasts of the UK and Ireland, but also much further south (Cape Verde and the borders of the Arctic Circle). 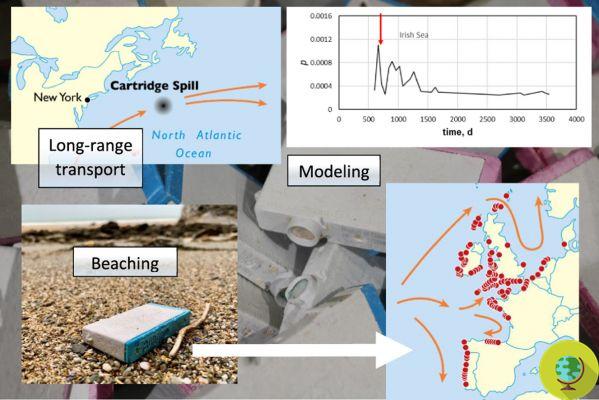 The map shows the dispersion of the cartridges (Credit: sciencedirect.com)

The study was conducted by the University of Plymouth and the Lost at Sea Project. Sighting data and oceanographic models were combined to report the exact locations of the cartridge findings. The period of the first findings suggests that the cartridges traveled at a speed ranging from 6 to 13 cm per second - demonstrating how quickly objects can disperse in the open sea. Furthermore, through microscope investigations, a progressive deterioration of the external surface of the cartridges was observed, which with time became chalky and crumbling. This has resulted in the formation of microplastics rich in titanium, the main element of the ink for common printers. In some cases the presence of an electronic chip containing copper and gold has been highlighted.

Andrew Turner, professor at the University of Plymouth and author of the study, says: “Cargo losses are not common, but estimates suggest that there may be thousands of containers lost at sea each year. In the short term they can cause damage to the seabed, but in the long run they can have an impact both at the spill site and much further away - as the study shows. This research demonstrates once again how plastics not designed to be dispersed in the environment can destroy themselves and become a source of highly harmful microplastics. "

How to produce drinking water from the sea using solar energy ❯

add a comment of Like thousands of printer cartridges have been wandering the ocean for 7 years, ending up on the beaches of half of Europe