Goodbye plastic in landfills by 2020: here is the zero waste recipe (VIDEOINTERVIEWS) 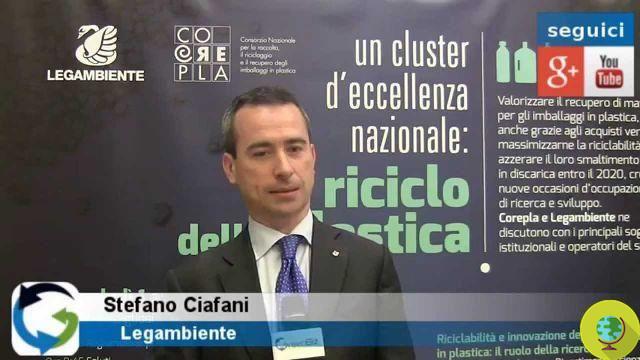 By 2020, eliminate waste deriving from plastic packaging. This is the proposal made known yesterday by Legambiente and Corepla during the conference "A cluster of national excellence: the recycling of plastic" which took place in Rome


By the 2020 reset i waste from plastic packaging. This is the proposal made known yesterday by Legambiente and Corepla during the conference "A cluster of national excellence: plastic recycling”Which took place in Rome.

All this is possible only if specific specifications are adopted prevention policies. And this is the advanced idea: encourage reduction and recycling policies.

How. The proposal aims to define a national strategy to ensure an increase in the quantity and quality of separate waste collection packaging in plastic and to maximize recycling. In fact, the elimination of plastic waste passes through the material recovery for packaging, also thanks to green purchases, from the increase in recyclability, up to reaching theelimination of landfill disposal by 2020.

The numbers. The objectives were considered in the light of the results on the trend of plastic recycling collected by Corepla. In spite of the crisis, these are positive figures. In 2014, collection and recycling increased. The 7.306 Municipalities active in the separate collection service of plastic packaging recorded an + 8% compared to 2013, with over 830.000 tons of plastic packaging collected. A record both for the sector and for the Municipalities that had started the collection service. Where do these positive results come from? Firstly, from the take-off of collection in historically difficult areas such as the South and secondly from the further increase even among the "top of the class" (for example, Veneto has gone from 20 to 21 kg per inhabitant).

The national average per capita collection figure increased by one kg per inhabitant per year, from 12,9 to 13,9 kg. In 2014 they were recognized 234 million euros from the Consortium to the Municipalities o to their delegated operators, to cover the higher costs incurred for the differentiated collection services of plastic packaging.

Let's talk about recycling. In 2014, 450.000 tons of plastic packaging waste from separate collection were recycled, to which must be added those from independent industrial operators equal to 360.000 tons, for a total recycling of approximately 790.000 tons.

One figure above all: around 349.000 tons were used as energy raw materials instead of fossil fuels.

Solutions. There are 5 measures to be implemented to reach the goal of zeroing by 2020. We start with remodeling of the eco-tax (defined by law 549 of 28 December 1995) which will have the task of transforming the current maximum limit of 25 euros per ton into a minimum threshold of 50 euros per ton, with progressive discounts for municipalities based on the achievement of collection percentages differentiated and recycling. It will then have to be implemented policies to support green purchases to develop the plastic packaging recycling market or a subsidized VAT system for artifacts made with a minimum percentage of recycled material. The third move is to to urge the placing on the market of increasingly recyclable packaging and at lower costs, using a criterion of rewards and penalties. It is also necessary to launch institutional organizational and participatory models, with a law on participation similar to the one under discussion in the Senate on strengthening the environmental control system. And finally it is necessary prevent the production of waste through a pricing system that is not penalizing for virtuous domestic or productive users.

"A change of pace necessary to overcome as soon as possible the too many emergencies linked to the use of the landfill, which also represents a concrete possibility to get out of the crisis" said the president of Legambiente Vittorio Cogliati Dezza. “We hope that the government's reflection on the Green Act and the resulting measures will go in this direction and grasp the important possibilities. Starting with100% investment of the proceeds of the desired eco-tax for waste prevention, reuse and recycling policies and a new punctual rate ".

To explain it to the microphones of GreenBiz.com among others, Giorgio Quagliuolo, president of Corepla, Vittorio Cogliati Dezza, president of Legambiente, Ermete Realacci, Stefano Ciafani and Walter Facciotto of Conai.

"The 'zero landfill in 2020' objective can also be achieved by freeing up economic resources currently committed to energy recovery of plastic packaging that is difficult to recycle, resources that the consortium could allocate to initiatives aimed at increasing recycling rates" he said. called Quagliuolo.

Separate collection: 6 things to know about the correct recycling of plastic. Corepla takes away all doubts

Goodbye plastic: the 7 ways to reduce packaging in the fruit and vegetable department

add a comment of Goodbye plastic in landfills by 2020: here is the zero waste recipe (VIDEOINTERVIEWS)