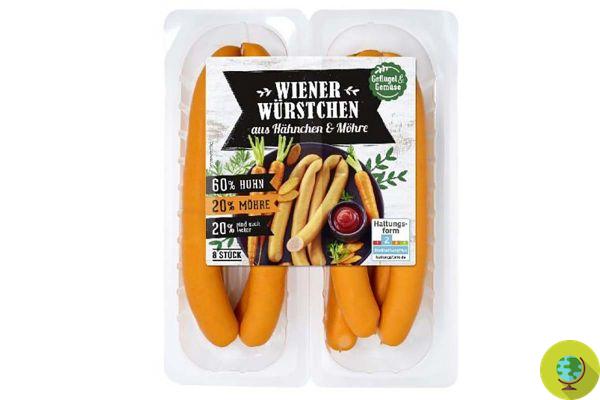 In Germany, Lidl has launched a line of products based on less meat and a higher vegetable content

Since January, new meat products have been available in Lidl supermarkets in Germany, enriched with the addition of abundant plant content. It is a kind of "hybrid meat" that should help to consume fewer products of animal origin, for the benefit of health and the environment.


Lidl has announced the sale of meat and sausages with a plant content of up to 40%. These “hybrid” products are launched for the first time by the German discounter but in reality chains such as Aldi and Rewe had already made similar proposals available to their customers.

How are they composed? It is a line of products that includes: minced beef burgers enriched with jackfruit, Viennese sausages with carrots and chicken sausages with soy protein in the classic and garlic varieties.

With the launch of these products, made from a combination of animal and vegetable proteins, Lidl intends to target "customers who want reduce the consumption of animal products, and therefore their ecological footprint, without completely renouncing meat".

The idea behind it is in fact to help people reduce their consumption of meat in favor of a greater quantity of vegetables. In Germany, 84 kilograms of meat are consumed per person per year, far too much. On the other hand, the trend towards meat substitutes and a more conscious diet is constantly increasing: it is estimated that in 2022 in Germany almost 480 million euros of vegetarian and vegan meat substitutes will be sold.

It is no coincidence that Lidl has already announced in a press release that it intends to continue to:

But are these products really useful for the purpose, or are they just commercial gimmicks?