Lactic ferments: what they are, when to take them and which ones are effective 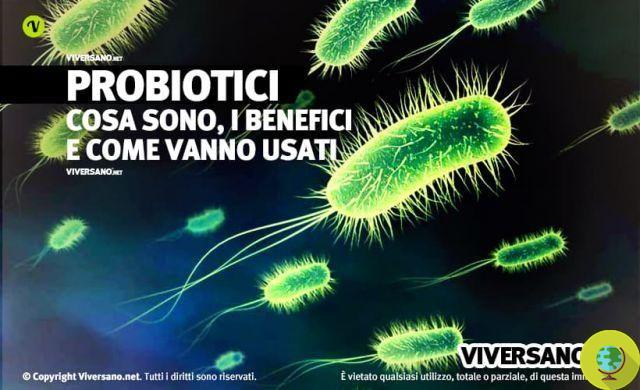 The gut is considered our second brain and its health is paramount. Probiotic lactic ferments help us to keep the bacterial flora in balance

We often hear about lactic ferments, sometimes the doctor or pharmacist will recommend them in case of gastrointestinal problems: diarrhea, abdominal bloating, indigestion, colitis, etc. or after taking antibiotics. But exactly what they are, what role they play and what are the situations in which they can really help?


To understand this, you need to take a small step back and talk briefly aboutintestine and in particular bacterial flora that populates it made up of numerous species (over 500) which perform various functions useful to our body. It is no coincidence that the intestine is now considered "a second brain”, A place where essential functions are performed for the well-being of parts of the body even very distant from it.

The intestinal bacterial flora is responsible for synthesis of vitamins, produces digestive enzymes, antibacterial substances and modulates the immune system. All this happens correctly if the different microbial species are in equilibrium (eubiosi) considering the number of species, proportions and types. In fact, when one or more species take over the others we are faced with a situation of dysbiosis, which by altering the normal relationships and functions leads to the appearance of disorders.

What causes dysbiosis? There are really many physical and emotional factors as well as incorrect habits in one's lifestyle that can cause a state of dysbiosis. These include: unhealthy eating, smoking, alcohol, medication, pregnancy, stress, etc.

WHAT LACTIC FERMENTS ARE AND WHEN TO TAKE THEM

Here then is that, for restore the right balance, lactic ferments or better i Probiotics which as the word says are microorganisms (bacteria) not only alive but also "In favor of life" unlike "antibiotics" (anti-life) which, once taken, kill both "good" and "bad" bacterial species.

It is therefore simply a matter of bacteria that normally live in our body and daily we feed through the food we eat. The name derives from the fact that the result of their digestion is lactic acid.

Some species of probiotics respond to particular characteristics (including that of having physiological benefits proven by research) and for this reason they are considered Probiotics. It is also essential that, at the time of taking, the probiotics are active and vital to be able to reproduce in the intestine and repopulate it in its right proportions. It would be important, however, to understand first what type of dysbiosis is underway in order to be able to act with the most suitable bacterial strains and not to take generic products based on lactic ferments which at times may not be decisive.

Le two forms of dysbiosis most common are that fermentative (due to an excess of carbohydrates that ferment) and that putrefactive, often caused by an excess of fat and protein in one's diet that are poorly digested. How can they be recognized? The first gives symptoms such as diarrhea, belly that swells after meals and clear stools that float, while the second often involves constipation, very odorous intestinal gas, bitter mouth, heaviness in the stomach.

Very widespread is also the fungal dysbiosis due to a disproportionate growth of yeasts and fungi such as Candida albicans which can cause not only gastrointestinal (diarrhea, swelling) and vaginal symptoms but also the appearance of itching and hives on the body.

If you suffer from some of these symptoms you can resort to using specific probiotics for your problem, from take after meals. The duration of the recolonization cycle can vary according to the symptoms and can be preceded by a period of intestinal cleansing that can always be done using probiotics (specific for this use) such as Enterococcus faecium combined with Saccharomyces cervisiae Boulardii (a yeast).

WHICH LACTIC FERMENTS ARE MOST EFFECTIVE

The probiotics that work the most are those species-specific or in our case not those derived from the intestine of sheep and goats but i human strains, able to tolerate stomach acid and arrive still alive and vital in the intestine where they will then have to act. Exist two large families of bacteria that are particularly friendly to our intestine and it is the family of "Lactobacillus" and "Bifidobacterium”. These include L. Acidophilus, L. Rhamnosus, L. reuteri, B. Bifidum, B. Longum, B. Breve and B. infantis.

In case of fermentative dysbiosis the most suitable probiotics are those of the family of lactobacilli, while in the case of putrefactive dysbiosis i are more useful bifidobatteri. Clinical studies carried out on children have shown that taking Lactobacillus reuteri DSM 17938 may help in the improvement of symptoms of colic or diarrhea. In case of Candida instead, in addition to lactic ferments, it is good to combine natural antifungal therapies and a diet that limits a lot of carbohydrates and sugars.

Where to find lactic ferments? In the pharmacy or herbalist's shop it is possible to find different types, but also online there are produced by serious and valid companies

- Probiotics and prebiotics: what they are, benefits and where to find them

Iron: an element that we cannot do without ❯

add a comment of Lactic ferments: what they are, when to take them and which ones are effective