Juice Plus, fine by the antitrust to the network marketing of slimming supplements 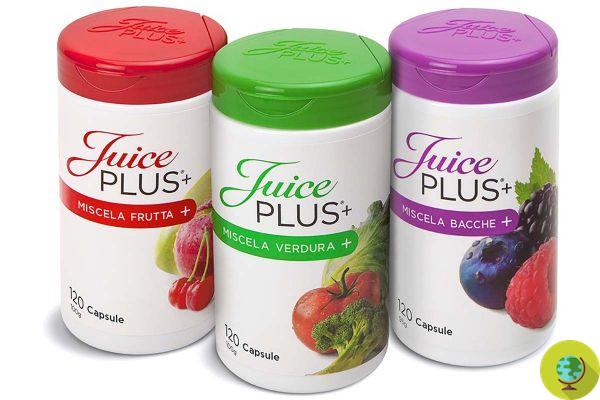 You probably know Juice Plus, a company of products to promote weight loss that uses an extensive and ubiquitous network of sellers on social media. Now the company has been fined precisely because of some of its affiliates who pretended to be simple consumers on Facebook.

You probably know Juice Plus, a company of products to promote weight loss that uses an extensive and ubiquitous network of sellers on social media. Now the company has been fined precisely because of some of its affiliates that they pretended to be consumers on Facebook and advertised false testimony.

What Juice Plus offers is a "miraculous" program made up of healthy nutrition but also soft drinks, berries that help deflate the legs and other various supplements, sold at a high price and which promise amazing results in a short time (not only in terms of weight loss but also for greater well-being at 360 °).

Regardless of whether all this works or not, the Antitrust has now come to fine the well-known company of supplements and meal replacement products that is behind a very dense multilevel network of vendors. The problem is precisely the latter as their behavior on social media has proved decidedly incorrect.

What happened? The sellers, instead of clearly explaining their role within the market of these products, praised their qualities as if they were simple consumers, satisfied after trying the Juice Plus weight loss program. All this took place within secret Facebook groups, evidently with the aim of increasing the purchase of supplements and other products of the company.

Here are some examples of testimonies provided by the Antitrust in the Text of the Provision as evidence:

In the group "the change of men and women" a saleswoman writes: 'not only have I lost 15 kg but I have greatly reduced hot flashes'

In the group “Turn flab to rock” a salesperson writes that following the program: “I solved my cholesterol problems (…) for three years together with my doctor, we solved nothing. Days ago I did the analyzes and my values ​​are perfect ".

It is clear that, in addition to an incorrect sales practice, we are also faced with something dangerous for people's health who may think that such products help their well-being in some way by trusting the advice of vendors without any qualifications and without first having heard the opinion of their doctor.

We consider among other things that these supplements are also offered lightly to pregnant or breastfeeding women, as well as to people suffering from pathologies.

In addition to not declaring themselves as sellers, the people in charge of disseminating the Juice Plus products advertised false testimony of the results obtained with supplements, drinks, bars, etc.

An example? There are those who said they lost 16 kg in 3 months without giving up!

In essence, the company violated the Consumer Code it was accused of covert marketing and misleading promotion. And this has cost him very dearly. The Antitrust Authority has in fact established a one million euro fine for unfair commercial practices.

To report the situation to the Antitrust was the Codacons, a consumer association that reported the content that appeared on some Facebook groups where in the discussions between users reference was made to the use of Juice Plus products. question and answer which obviously the company in question took part in, which attempted to defend itself, ended with a hefty fine.

Juice Plus wrote in a note that:

"Constantly monitors that the material produced by franchise partners, real sales representatives, complies with the company's rules of conduct" and that it has "always condemned behaviors that violate company rules, as well as incorrect sales practices of the product which, when demonstrated, have always been punished. We have cautioned, sanctioned or dismissed people whose behavior was found not to be in line with company guidelines. Juice Plus + is evaluating the decision taken by the Antitrust and will decide the next steps as soon as possible, in order to ascertain the legitimacy of the company's actions ".

We are wary of diets and miracle programs and, if we need to lose weight, let us turn to those who have studied for years to help us in this enterprise, namely nutritionists and dieticians.

add a comment of Juice Plus, fine by the antitrust to the network marketing of slimming supplements