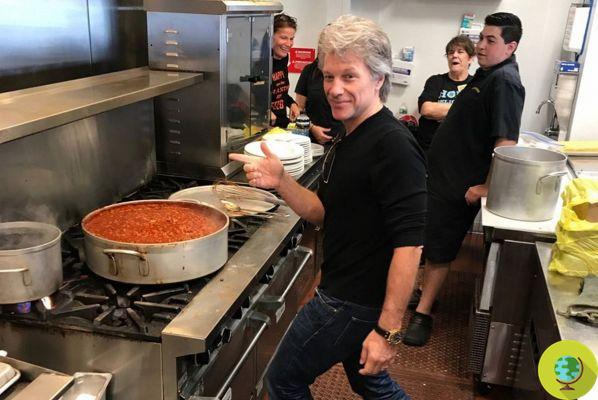 He is one of the best known rock stars in the world, but in recent years, by Jon Bon Jovi we have also come to love his extraordinary generosity towards the people most in need.

He is one of the best known rock stars in the world, but in recent years, of Jon Bon Jovi we have also learned to love his extraordinary generosity towards those most in need. We had already talked about his Soul Kitchen social project and the JBJ Foundation, now the singer and activist has opened his third restaurant where those in need can eat without paying anything, but offering a little help in return.


This time the new restaurant caters to non-resident students in financial difficulty. In fact, at Rutgers University-Newark, 50% of undergraduates have a very low income and meals away from home are often too burdensome for little finances. To come to their rescue is the JBJ Soul Kitchen, founded by Bon Jovi and his wife struck by the fact that one in three students fight against poverty.

“Food insecurity is a critical problem for many college students, and this affects us. Students already have so much to worry about. Worrying about the meal also shouldn't be on the list, ”he said Dorothea, wife of the singer.

"We appreciate the collaboration with the University that has allowed us to address this issue as a priority so that students always have a place to go for a tasty and healthy meal."

The restaurant will function exactly like the other two. It will therefore be a community that will offer menus with priceless dishes. The idea is precisely that those who do not have enough money can leave a small contribution and if he does not make it even like that, he can offer his help in the kitchen or in the garden which then produces the raw material of the dishes.

There are already two other places, both in New Jersey, the first in the Red Bank area, the second is located near the River Toms, an area hit by Hurricane Sandy in 2012 and they are very busy so much that they have already served over 100 thousand meals.

According to the Soul Kitchen website, the 54% of meals served it was financed by donations, while the rest was through voluntary activities.

“Our mission has always been to bring about positive change and tackle the problems of hunger and homelessness,” said Bon Jovi.

The meals are three courses and the ingredients are all natural and zero km. The menus are varied, there is the standard one, the vegan and vegetarian one. The waiters and all the staff are also volunteers. A real solidarity project enclosed in a beautiful slogan chosen by the singer: "Everyone is welcome to our table".

Juice Plus, fine by the antitrust to the network marketing of slimming supplements ❯