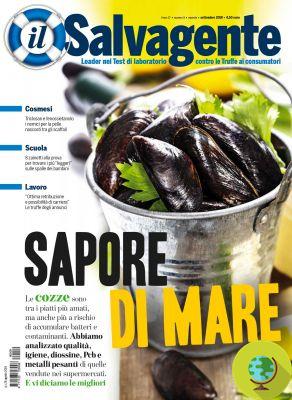 Dioxin alarm in food produced near Ilva in Taranto. 30% of the goat's milk obtained in the areas near the Ilva plant and the mussels raised in the area are contaminated with dioxin.


Alarm dioxin in foods produced near the Ilva of Taranto. 30% of the goat's milk obtained in the areas close to the Ilva plant and the mussels grown in the area are contaminated with dioxin.

The results of the exams on food products produced and distributed in this area - delivered in these days to the Minister of Health, Renato Balduzzi - highlight a worrying situation in both milk and mussels.

The results of the analyzes refer to the milk and food samples taken between on September 26 and October 6, following the surveillance plan on dioxin contamination in the Taranto area, ordered by the Directorate General for Hygiene and Safety of Food and Nutrition. Twenty-five milk samples taken from the seven farms located within a radius of ten kilometers from Ilva were examined. And 20% of these are contaminated.

The feared danger has become real: a few weeks ago the Minister of the Environment, Corrado Clini, highlighted a possible risk of poisoning the food chain in the area contaminated by the Ilva of Taranto. Today it is a sad reality.

And in the face of the data that speak for themselves, Ilva, the Minister of the Environment and the pollution control agencies are keen to specify that - since the entry into force of regional law 44 of 2008 - there has been a decrease in levels of dioxin, which went from five hundred grams in 1999 to 100 in 2006, up to 10 in 2011.

But since 2008 there has been no decrease in the dioxin concentration, which today continues to be significantly higher than the levels set by law.

Dioxin contamination ascertained, the In the, they seized one hundred and thirteen sheep and goats and all the contaminated mussels, but how many kidnappings will there still be? And how many foods have already been ingested by children and adults in recent years?

The control activities are watering from all sides and Minister Balduzzi himself admitted the criticality of the situation, so much so that for the next few months he hopes that the whole country will be interested in the Taranto affair. Because checks and prevention activities on citizens' health must be done constantly and not only when the danger is remembered!

- In Taranto people die more of cancer. Has Ilva compromised the food chain?

- Ilva: it is an open battle between Clini and Bonelli on the numbers of tumors

Illustrations about friendship: the most beautiful images of this wonderful bond ❯

add a comment of Ilva di Taranto: dioxin-contaminated milk and mussels. It's a health warning