How to make the perfect cup of tea 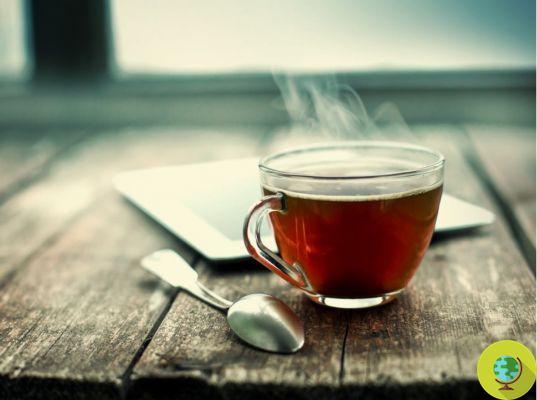 The preparation of a normal cup of tea, even outside of a real ceremonial always requires a small ritual.

Tea is probably the most popular drink in the world, after plain water. There preparazione than a normal one Cup of tea, even outside of a real ceremonial, as in Japan, it always requires a small ritual.


From the choice of the tea variety, to the preference for loose or sachet tea, to the chosen tool to bring the water to a boil to the decision to sweeten or stain the tea, or to drink it as it is: here are some of the variables that distinguish the way to prepare tea not only among the different peoples of the world but also among the people of the same family.

We had already told you about most popular tea varieties in the world, of how to prepare an infusion and how to prepare a decoction using spontaneous plants and medicinal herbs, but we had not yet revealed the secrets for the preparation of one cup of tea to perfection.

Which and how much tea to use

Consider using one tea bag per cup o one teaspoon of loose tea per cup. Remember that some high quality teas can be used for a second time, to prepare a new drink, perhaps with a slightly less intense taste. In any case, it is a simple anti-waste advice.

However, consider that in China the tea prepared by reusing the same leaves for the second or third time is considered the best. The choice of variety of tea to use depends on personal tastes. Take quality and respect for the environment into account when choosing your tea: prefer organic and fair trade tea as much as possible.

Depending on the variety of tea, the temperature can change slightly and be, for example, between 70 ° and 95 ° C. If you do not have a suitable thermometer to accurately measure the temperature from the water, you can bring it to a boil and wait a few minutes. so that it drops below 100 ° C, if required by the chosen tea variety. Please note the following indicazioni as for the water temperature for making tea:

As well as the temperature of the water for the preparation of the different types of tea, the brewing time. Try to respect as much as possible what is indicated on the tea bags you have selected, but in case of lack of indications you can refer to the following infusion times for the most common types of tea.

Adding other ingredients to tea is part of personal taste and follows your habits. There are those who love to wear a slice of lemon in black tea and those who prefer to squeeze a few drops of fresh lemon juice directly into the cup, those who do not give up adding a little sugar or another sweetener and those who always choose not to sugar. Still others stain tea, especially black tea, with classic or vegetable milk. Keep in mind, however, that regarding the finest teas, like white tea, it would be good to savor them naturally without any type of additional ingredient.

Do not leave the choice of cups and teapot to use for making tea to chance. Classic teacups are quite small: although larger than a coffee cup, they are smaller in size than a milk or breakfast cup. The finest teacups have the thin edge and golden. You can decide to bring the tea to a boil in a saucepan, in an electric kettle or in a teapot to be heated on the stove.

Alternatively, here is also the samovar, a metal container traditionally used to heat water for tea in Russia, the Slavic countries, Iran and Turkey. If your teapot has a filter, you can use it directly for infusing loose tea before pouring the ready-made drink into the cups.

The tea ceremony in Japan

La tea ceremony (Cha no yu) in Japan is a real one social and spiritual rite which is part of the Zen ceremonial arts. Matcha tea is used in the Japanese tea ceremony. This is powdered green tea that is mixed with hot water using a special bamboo tool. In the case of the matcha tea there is no mention of a real infusion, but of a suspension. The tea powder is drunk together with the actual drink. Matcha tea was and is still used by Zen monks to stay awake during long meditations.

The quality of the selected tea leaves and the product in the sachet, as well as their correct storage. The tea should be stored in a dry place, away from both light and humidity. Loose tea should be stored in airtight jars to retain its aroma. The same solution also applies to tea bags, which you could otherwise store in wooden or cardboard boxes.

Are you ready for brew a perfect cup of tea? Which tea variety will you choose?

How to prepare a green tea detox tea perfect for Christmas ❯