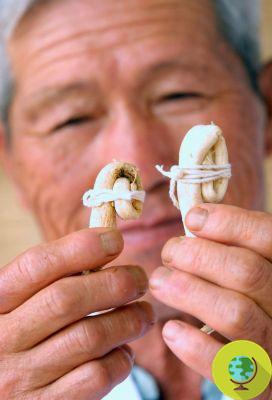 Boys, say goodbye to viagra, a ginseng-based tablet is enough to give new impetus to your sex life. That the known plant had aphrodisiac properties is nothing new, but now comes a new confirmation that a chemical compound is not needed to relieve the stronger sex from the problem of impotence.

Boys, say goodbye to viagra, in fact, a tablet based on ginseng to give new impetus to your sex life. That the known plant had aphrodisiac properties this is nothing new at all, but now comes a new confirmation that you don't need a chemical compound to relieve the stronger sex from the problem of impotence.

The new research comes from a South Korean university, precisely from theYonsei University. Well, the study found that the herbal remedy, a traditional aphrodisiac, can actually help fight erectile dysfunction in men. A novelty for the contemporary man, but a solution used since time immemorial in Chinese culture.

Not just as a 'homemade' natural remedy. Science has therefore also recognized the properties of ginseng. According to the new research, in fact, ginseng-based tablets are really capable of reviving a man's sex life. To prove this, the South Korean study administered pills made from the famous plant to more than 119 subjects with mild to moderate erectile dysfunction. The group was split in two and while half took four tablets a day containing Korean ginseng extracts, the other half took a placebo. After eight weeks, the researchers measured the improvements using an officially recognized scale known as International Index of Erectile Dysfunction. The results showed a marked improvement in bedroom performance in the subjects who took the ginseng berry tablets.

Results reliable since the 'guinea pigs' were the same men. Luckily not animals. Much research of this type has so far been conducted on mice. Although drugs such as Viagra, Cialis and Levitra have revolutionized the treatment of this problem over the past decade, about 30 percent of men who take these substances do not benefit from them and see no improvement.

For these people, the only other options are rather annoying solutions, including injecting drugs directly into the penis. While herbal remedies such as ginseng have hitherto been presented as alternative medicine treatments, they may now be associated with the medications in use. The secret of ginseng, in this case, lies in its root which contains various active ingredients, called ginsenosides or panaxosides, responsible for the medicinal effects of the plant.

The study was published on International Journal of Impotence Research.

- Ginseng: a thousand properties, uses and where to find it

Ginseng: a thousand properties, uses and where to find it ❯

add a comment of Ginseng better than viagra for erectile dysfunction