Eat insects to save the planet 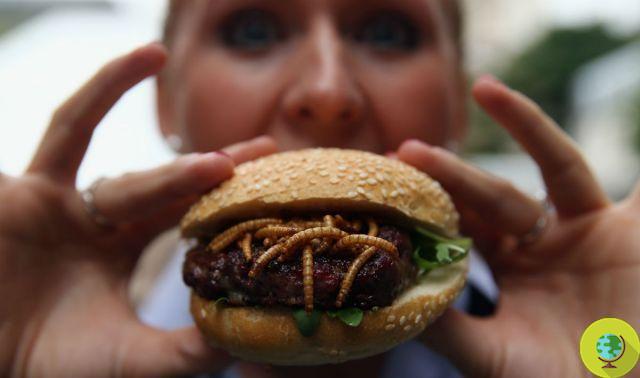 Introducing ants, grasshoppers, butterflies and crickets into the diet would seriously contribute to reducing world hunger as well as greenhouse gases from livestock farming.

To introduce ants, grasshoppers, butterflies and crickets in nutrition would seriously contribute to reduce hunger in the world and also the greenhouse gases deriving fromlivestock.


To reiterate the nutritional and environmental potential deriving from the breeding of insects for food purposes in order to cope with the growing population increase, it is still there FAO who returns to discuss this hypothesis at the congress of Royal Entomological Society English that took place in recent days.

La insect-based diet had already been the subject of a seminar organized by the UN agency a couple of years ago in Thailand, but today it comes back to make its way even in the light of latest studies on livestock farming which not only occupy two thirds of the world's agricultural land, but as we have seen several times, they generate at least 20% of all greenhouse gases on the planet.

“There is a crisis of meat - he claims Arnold Van Huis, entomologist at the University of Wageningen in Belgium and author of the paper of the united nations -. The world population will grow from 6 to 9 billion by 2050 and we also know that meat consumption has increased dramatically: 20 years ago the average was 20 kg now it is 50 and it will be 80 in the next 2 years. If it really continues like this, we will need another planet “.

With 1400 edible species that are already consumed all over the world, insects would therefore offer great possibilities both from a nutritional and a commercial point of view.

So if the idea of ​​eating insects may seem strange or even disgusting, know that their consumption, already widespread in many parts of the planet (in Africa at least 527 different species are eaten, as well as in 29 Asian countries and in 23 countries in the Americas) would actually represent a valid food alternative, as insects are very nutritious, rich in proteins and minerals. Compared to meat or raw fish, for example, when taken in dried form, most species contain double the amount of protein. Some insects, especially in the larval state, are also rich in lipids and contain important Vitamins.

In addition, breeding insects it produces fewer greenhouse gases than livestock: it has been estimated, for example, that the breeding of locusts, crickets and worms would emit "10 times less methane compared to livestock and even 300 times less nitrous oxide and less ammonia (pollutant produced by pigs and poultry) ".

In most regions where insects are eaten, they not only represent a fixed component of the diet, but are considered real delicacies. In Thailand, for example, and those who have been lucky enough to visit it can confirm, almost 200 different species of insects are consumed, many of which are highly sought after as snacks or delicacies.

Among the most consumed insect species we find beetles, followed by ants, bees, wasps and then grasshoppers, crickets and finally moths and butterflies.

add a comment of Eat insects to save the planet