Tips and tricks for cleaning and cooking Jerusalem artichoke


Il jerusalem artichokesAlso known as Jerusalem artichoke or German turnip, it is a tuber rich in properties and very healthy. But how to clean and cook this food? We wake you up some tips and tricks to not go crazy!

With its gnarled and lumpy appearance, Jerusalem artichoke presents a small problem: in most cases, before it can be used, the outer part must be removed. There are actually those who consume these tubers in their entirety (therefore without first peeling them), in fact the peel is not only edible but is also rich in properties. In many recipes, however, it is recommended to eliminate it, especially if it is not thin but rather thick and hard.

In reality the big difference is made by the type of Jerusalem artichoke, more or less tender, if it is an organic product as well as the way in which it is intended to be used. Basically:

How to clean Jerusalem artichoke

The problem arises because these tubers have a very particular shape and it may not be easy to clean them as is the case for potatoes with a more uniform appearance and consistency. The Jerusalem artichokes are in fact characterized by their protrusions, sometimes even very small, whose peeling is particularly difficult.

First of all, however, it is good to clean them by rinsing them under water with the help of a vegetable brush or a sponge. This step serves to eliminate well the earth that has deposited between the folds of the peel.

And then? What is the quickest and fastest way to clean Jerusalem artichokes?

There are those who use the potato peeler but this tool, even if convenient, may not be the best method as it would not be able to peel the characteristic protuberances of this tuber correctly. You can then use a sharp knife or paring knife, with which to scrape off the peel from the central parts and then, removing the gnarled parts, peel those too to avoid wasting the smaller parts of the Jerusalem artichoke. 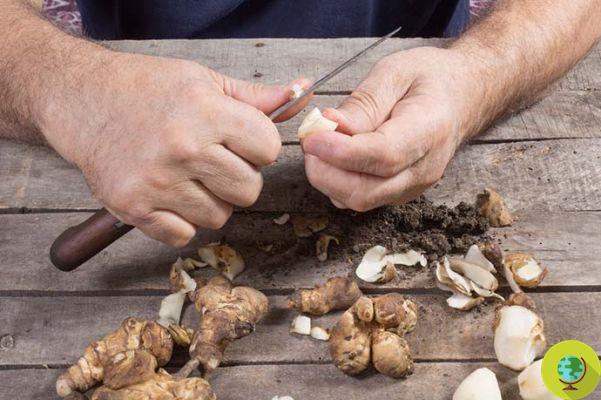 Once cleaned and rinsed under running water, Jerusalem artichokes, a bit like artichokes, tend to blacken. It is therefore advisable to immerse them in one basin with water and lemon before using them in the chosen recipe. You can also soak them in the solution with the lemon already cut into slices or in other shapes depending on how they suit you most.

For the same reason, before starting to clean the tubers it is good to sprinkle a little lemon on your hands or wear gloves.

Un trick to make peeling easier is to rinse and brush the tubers and then put them to boil in water. Once cooled a little, the outer part comes off more easily with the help of a small knife. However, this system cannot always be used as some recipes use raw Jerusalem artichoke or cooked in different ways than boiling.

How to cook Jerusalem artichoke

Once clean and ready to be used, Jerusalem artichoke lends itself to being cooked in different ways: 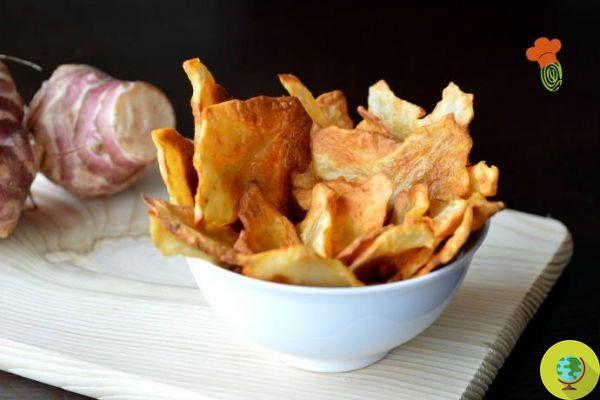 We present a series of recipes with which you can experience the delicious taste of Jerusalem artichoke: 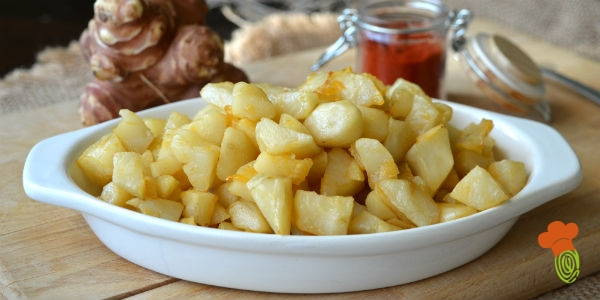 Jerusalem artichoke is an easily digestible tuber but can give problems to the intestinal tract. After consumption, several people experience the problem of excessive air formation in the intestine. This is due to the fact that this tuber is rich in fiber. However, there are some tricks to avoid this problem as much as possible: consume the tuber in small doses to see the effect it has and the personal degree of tolerance, do not combine it with legumes or vegetables that can have the same disadvantage, for example broccoli and cabbage. and above all, avoid consuming Jerusalem artichoke raw or with the peel.

Tips and tricks to prevent and treat sunburn ❯