"An exotic touch to Tex-Mex cuisine." This is the promise of Taco Fusion, the Mexican restaurant in Tampa, Florida, which has ended up in the eye of the storm to offer unusual meat from exotic and wild animals, such as ostriches, on its menu. camels, bison, or otter, gazelle, beaver, rattlesnake, kangaroo and, recently, also lion meat.

“An exotic touch to Tex-Mex cuisine”. This is the promise of the Taco Fusion, the Mexican restaurant in Tampa, Florida, which ended up in the eye of the storm for offering unusual meat from exotic and wild animals on its menu, such as ostriches, camels, bison. O otter, gazelle, beaver, rattlesnake, kangaroo. And, recently, also lion meat.

It does not matter, in fact, that this animal is in danger of extinction: in fact It is legal to sell and eat lion meat in the United States. The Americans also seem to like the "exotic" offer and the restaurant enjoys success and popularity, so much so that it has been forced to warn customers that its meats are available. in limited quantities and at market prices. For the lion, this translates to $ 34,99 per taco, very expensive compared to cheaper options like kangaroo or ostrich, which both cost $ 13,99.

"Who decides which animals are worth eating and which are not? The reason is that a lion is "majestic" and therefore not usable for the consumption of meat? So what's the lesson? That only those who are "majestic" must be treated well and the ugly go to the slaughter? How redundant and stupid does this reasoning sound? ", explains the restaurant, adding that its lion meat comes from a reputable Illinois supplier. 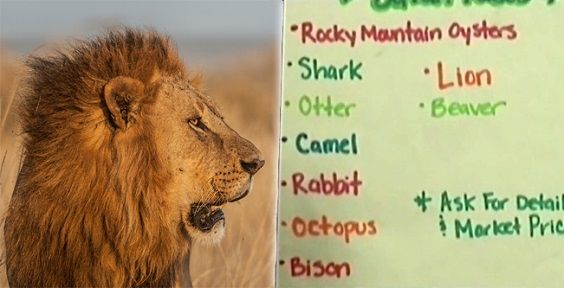 But, fortunately, the consensus was by no means unanimous. Hundreds, thousands of criticisms have rained down on the Taco Fusion. In the era of web 2.0, blogs, sites and social networks have been the theater of criticism. Especially twitter, where users have strafed the @TacoFusion account: “you are disgusting. Shame on you and those who destroy our planet ”, writes one user. Brad Barnett, restaurant manager, responds in kind, advising those who do not agree not to eat his dishes ... as if serving endangered animal species for profit is normal.

Jackdaws: the fantastic properties and how to cook them to enhance their benefits ❯

add a comment of Tacos Fusion: Lion meat on the menu