Spirulina, Chlorella, fly larvae and mycoproteins, for scientists the key foods to feed the world in the near future

Spirulina, Chlorella, fly larvae and mycoproteins will feed the world: says a research group from the University of Cambridge

Spirulina, Chlorella, fly larvae and mycoproteins will feed the world: a research group from Cambridge University affirms that state-of-the-art and environmentally controlled systems capable of producing new nutrients should be integrated into the food system to reduce vulnerability environmental changes, pests and diseases. Also in consideration of the increase of the world population.


More people, less food: a combination of factors which, if not taken for cover, can only worsen the problem of world hunger, continuing to affect underdeveloped countries and therefore increasing social differences and tensions.

The burden of malnutrition is probably the most persistent humanitarian crisis: two billion people suffer from food insecurity, including over 690 million undernourished people and 340 million children suffering from micronutrient deficiencies.

And, even if they don't seem "palatable", spirulina, chlorella, insect larvae and mycoproteins (proteins derived from fungi) as well as macroalgae have already attracted interest as nutritious and more sustainable alternatives to traditional plant and animal foods. .

These nutrients can in fact be grown on a scale in modular and compact systems suitable for urban contexts and isolated communities such as those typical of remote islands. With an approach that researchers call "polycentric food networks", Food could be produced locally and consistently by communities, reducing dependence on global supply chains.

To reach their conclusions, the researchers analyzed around 500 scientific articles published on different future food production systems, verifying which the most promising, including microalgae photobioreactors (devices that use a light source to grow microorganisms) and greenhouses for the breeding of insects, reduce exposure to the dangers of the natural environment, cultivating in closed and controlled environments.

Traditional agriculture is in crisis, unsustainable for the planet and in any case less and less efficient. The future can't go there, the researchers thunder. Indeed, the report argues that it is dangerous to rely on food produced with current methods and supply systems currently used, at the risk of heavy disruptions caused by a variety of factors beyond human control.

Read also: Locusts, droughts, wars and coronaviruses: for the UN they could cause famines of biblical proportions 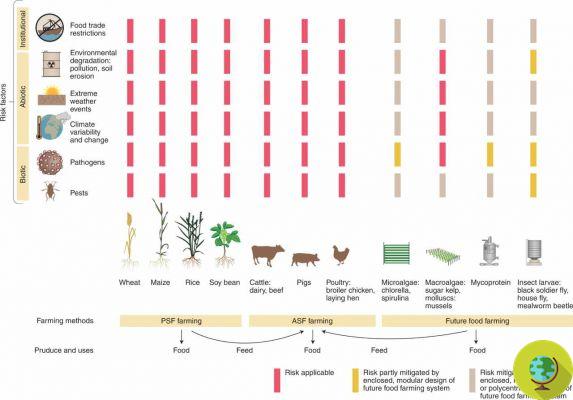 "Foods such as sugary algae, flies, mealworms and unicellular algae such as chlorella, have the potential to provide healthy and risk-resistant diets to tackle malnutrition worldwide - explains Asaf Tzachor, first author of the report. Our current food system is vulnerable. It is exposed to a set of risks - floods and freezes, droughts and dry spells, pathogens and pests - that marginal productivity improvements will not change. To future-proof our food supply, we must integrate completely new farming methods into the current system".

The Covid-19 pandemic, among other things, highlighted this vulnerability: Government-imposed travel restrictions have disrupted food production and supply chains around the world. But that's not the only factor.

“The coronavirus pandemic is just one example of the growing threats to our globalized food system - thunders Catherine Richards, co-author of the work. Diversify our diet with these future foods it will be important to achieve food security for all ”.

And if it may be impossible for us to accept eating fly larvae, the reservations about the consumption of new foods such as insects could be used as ingredients: Pasta, burgers and energy bars, for example, may contain ground insect larvae and processed micro and macro algae.

Read also: Made in Nature, the organic that is good for the environment!

Unfortunately, it seems forgotten again as a possibility to overcome this evident, dangerous and worsening humanitarian crisis.

The work was published in Nature Food.

add a comment of Spirulina, Chlorella, fly larvae and mycoproteins, for scientists the key foods to feed the world in the near future