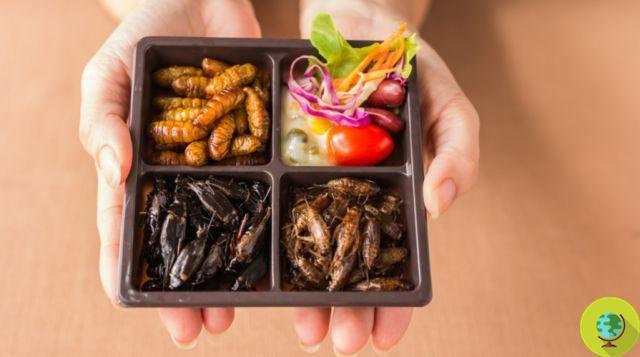 Do you shiver at the thought of eating insects? Well, if the advice of the United Nations, which suggests eating more insects to satiate human appetite for meat (they are much less harmful to the environment and provide a good nutritional supply), is not enough for you, you better start with think about it. At least according to entomologist Daniella Martin, who argues that even vegans should reconsider this new rich source of protein.

Do you shiver at the thought of eating insects? Well, if that's not enough the councils of the United Nations or FAO, which suggest eating more insects to satiate man's meat appetite (they are much less harmful to the environment and provide good nutritional intake), it's best to start thinking about it. At least according to the entomologist Danielle Martin, which claims that even vegans should reconsider this new rich source of protein.

The reason? The much invoked B12, whose presence can be identified in foods of animal origin, but, unfortunately, not in common plant foods, mainly due to the hygienic reasons for which fruits and vegetables are carefully washed before consumption.

And yet crickets and cockroaches are, incredibly, both good sources of vitamin B12. If vegans could, therefore, accept the idea of ​​eating insects, they could potentially better manage their vitamin B12 intake. How? Just a few crickets a couple of times a week, also useful for filling up on protein.

If the idea of ​​chewing dead bugs isn't appetizing, Martin obviously has a solution: ground insects, to be spread to taste and according to taste. Perhaps, however, it is worth remembering that the most eco-sustainable and practicable choice remains the vegeterian / vegan one, whose reasons certainly go far beyond the lack of B12.

It will suffice to consider that, if everyone embraced this philosophy, many of the current problems afflicting the planet would be solved, for the good of mankind and others. Especially since most of the people who make the vegan choice are driven by ethical motivations towards animals and could never accept the compromise proposed by Martin.

Lepsis: the terrarium for raising edible insects at home

add a comment of Insects: should vegans eat them too?