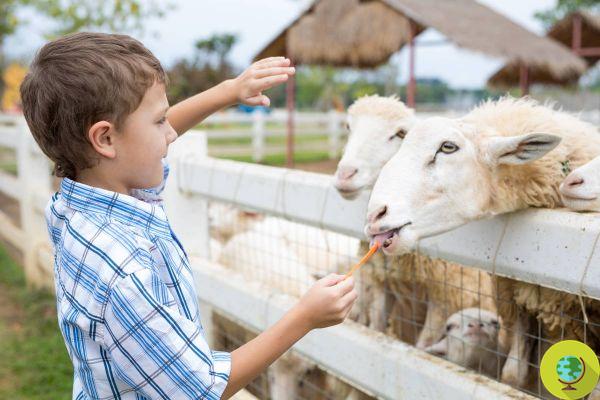 A new study has shown how children differ greatly from adults in their moral views on animals: so-called speciesism, the moral hierarchy that values ​​different animals differently, would be learned during adolescence.

Two weights and two measures, at the table as in life: the human being classifies and categorizes animals, treating some as if they were children and feeding on others - without realizing that even cows and chickens are sentient beings and in need of affection, certainly not of an ignoble life locked up in intensive farms and a painful death.

It is the phenomenon of speciesism - that is create a "moral hierarchy" of living beings on the basis of their belonging to a given species. This leads to the short circuit according to which we take care of some animals personally (for example dogs and cats), we finance initiatives to protect wildlife and endangered animals (such as pandas or tigers), but tacitly approve the mistreatment imposed on others (eg lambs and pigs), as they are classified as "food".

But not only: depending on whether a given animal is classified as "food" or not, our perception of his intelligence and sensitivity also changes - in spite of scientific evidence that disproves these prejudices. For example, dog and pig are both highly intelligent animals, which do not differ in their ability to suffer. However, most people treat these two animals very differently, perceiving the pig as less intelligent than the dog and unworthy of affection.

This classification certainly is influenced by the society we live in, who accepts and tolerates the barbarism committed in intensive farming despite being aware of the suffering inflicted on animals: with rare exceptions, we are used from a very young age to feed on meat, fish, eggs, cheeses, and we continue until adulthood to drinking milk in the morning - even if weaning took place decades ago.

But what do children think of it, those on whom conventions and customs have not yet taken an irreparable hold? A group of British researchers tried to answer the thorny question by analyzing the phenomenon of speciesism in groups of children (9–11 years), young people (18–21 years) and adults (29–59 years).

The result of the survey is not surprising: children show a low level of speciesism and, consequently, they do not show the propensity to classify farm animals differently from pets; furthermore, they declare that they eat meat and animal products by convention or by being invited to do so by their parents.

Learning from adults, children from a very young age learn the use of social categories to understand reality and give a name to the different phenomena they experience, identifying groups (large and small, male and female, and so on) but also plant species and animals.

From the age of six, children are able to group animals according to their domesticity (farm animals, pets) and begin to internalize the information that some animals can be eaten by humans (this information it is often linked to prejudices about the low level of intelligence of animals destined to end up on our tables).

However, at the same time, the children show concern for the health of animals and regret for their mistreatment - even if they are animals linked to human nutrition. From the age of five, children are able to make moral judgments about the mistreatment of animals, giving greater value to the life of the latter than their very survival, resulting from the killing of chickens and pigs.

In this study, the researchers analyzed the opinion on the killing of animals for food that the three sample groups (children, young people, adults) have, in relation to four key variables:

While young children claim that farm animals and humans should be treated equally, it has unfortunately emerged that this positive belief is progressively lost during adolescence and eventually disappears altogether in adulthood. On the contrary, speciesism assumes a fundamental role with the passage from childhood to adolescence, prejudicing the ideology of the future adult.

The relationship of human beings with animals is full of double ethical standards - he explains Luke McGuire, author of the study. - Some animals are beloved housemates, while others are kept on factory farms for economic benefits. The judgments seem to depend largely on the species of the animal in question: dogs are our friends, pigs are food.

The 7 best supplements and vitamins most effective against stress ❯

add a comment of Children, unlike adults, think farm animals deserve the same treatment as pets