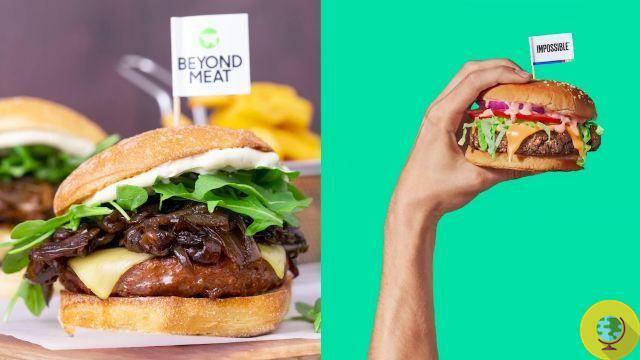 The market offers more and more plant-based products which emulate the characteristics of foods of animal origin.
So online, in fast food restaurants and on supermarket shelves and refrigerators the supply of meatless burgers is growing, proposed as healthy alternative to real meat burgers.


The alternatives to beef offered on the market are not intended, as you might think, for those who have chosen to follow a vegetarian or vegan diet, but for those people who want to continue to eat meat but who want to reduce consumption because concerned about the negative health effects of red meat.

So instead of giving up a few burgers a week, omnivores prefer to resort to products that resemble meat in appearance and flavor, but which promise greater benefits than real meat. But these meat substitutes are they really good for your health?  For UW Medicine experts and, in particular, nutritionist Judy Simon, this would be misleading advertising.

The nutritionist refers mainly to products such as Impossible Burger and Beyond Meat that are becoming popular in the United States but many of the "fake" meat burgers that we find in supermarkets are made in the same way, using ingredients that they undergo too many transformations and they contain excessive amounts of starches and especially salt, sugar and fat.

Vegetable-based burgers are not to be banned completely, but before you buy them it's good read the labels and check the ingredients.
This also applies to cheeses that are not cheeses, fish that are not fish, eggs that are not eggs: in most cases these substitutes they contain excessive amounts of saturated fat and salt, as well as raw materials that have had to undergo too many transformations to take on the appearance of familiar foods.

reduce or eliminate meat consumption it is trivial to eat less meat and opt for real foods, including good old legumes. When you buy a ready-made product, the rule of common sense always applies: you have to learn to read what packaged foods contain and do not be fooled by claims that attribute unfounded benefits to foods.

As regards the vegetable burgers, these can be prepared at home with simple recipes and starting from quality raw materials, without having to resort to unhealthy substitutes and often sold at a high price.

add a comment of Are “fake” meat burgers really healthier than red meat?