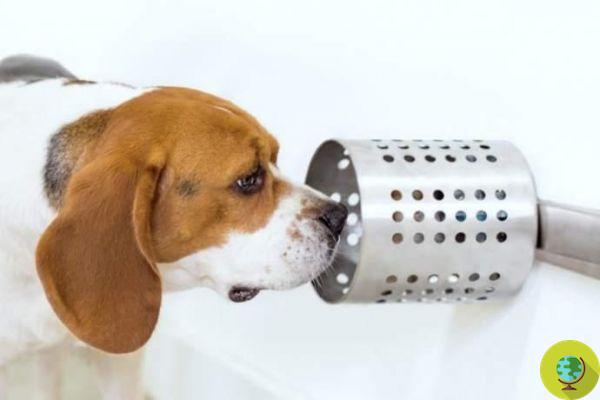 A study shows that dogs can smell cancer, leading to hopes of an early diagnosis that is not invasive at all.

Dogs smell tumors and this time science confirms it. If, in fact, so far there have been cases in the world of people saved from the degeneration of cancer thanks to the readiness of their four-legged friend, now, as proof of Fido's super sensitivity, there is a real scientific study that opens a new important scenario of economic and non-invasive early diagnosis.


This is research carried out by BioScentDx experts led by Heather Junqueira, which will be presented at the American Society for Biochemistry and Molecular Biology annual meeting in Orlando, Florida.

The data shows that dogs have olfactory receptors 10 thousand times more precise than humans and for this reason they are much more sensitive towards some smells that we are not even able to perceive. They would therefore have an authentic "super nose"Capable of detecting the presence of tumors in human blood samples with approximately 97% accuracy.

To arrive at these conclusions, the scholars used a form of training with the clicker (a positive conditioning system) to teach four Beagles to distinguish between normal blood and the blood of patients with malignant lung cancer. Among the four dogs, three correctly identified the "sick" samples in 96,7% of cases and normal samples in 97,5% of cases.

“Although there is currently no cure for cancer, early detection offers the best hope of survival,” explains Heather Junqueira. A highly sensitive cancer test could potentially save thousands of lives and change the way the disease is treated. "

Now BioScentDx plans to use the “canine detection” system to develop a non-invasive screening system for cancer and other life-threatening diseases. As a next step, last November the company launched a study on breast cancer to analyze the olfactory capacity of animals starting from the breath of the sick.

add a comment of Dogs smell tumors with 97% accuracy. Science confirms this