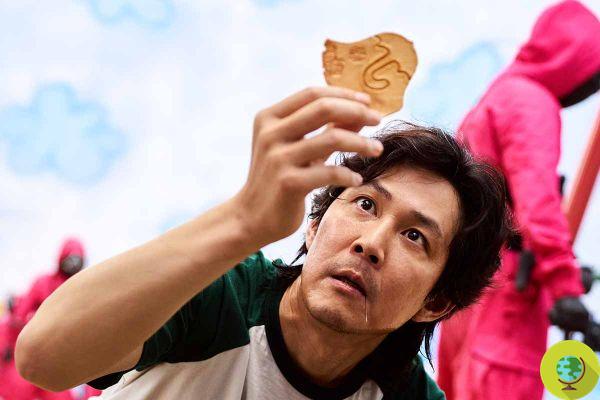 On social media, photos, videos and recipes of dalgona, the Korean biscuit that became famous thanks to the Netflix series, Squid Game, are depopulated

Until recently, hardly anyone had ever heard of Dalgona, a thin and crumbly Korean cookie that is now known to all fans of the hugely popular Neflix series, Squid Game.


In recent weeks, the Korean series Squid Game has won a place of honor among Netflix's proposals and is in fact becoming the most watched ever. The issues, as we have already told you in a previous article, are current, burning and very raw. But today we focus on a curious and decidedly lighter aspect. Read also: Squid Game: the Korean series that depopulated on Netflix throws us in the face the darker and more dramatic side of capitalism

In the third episode of the series, the protagonist of the deadly game designed for competitors is a strange flat and thin cookie, never seen in our latitudes. This is Dalgona, of South Korean origin, a street sweet made with caramelized sugar and bicarbonate, stuffed into a stick.

This is still sold in front of schools today but it was especially popular in the 70s-80s (now for obvious reasons it is coming back into fashion).

The peculiarity is that the biscuit is engraved in the center with a shape that can be of different kinds. In Squid Game, however, we find only four: circle, triangle, star and umbrella.

The game planned for the competitors, as happens in every episode of the series, is inspired by a typical pastime of children, in this case that of cutting out with precision the shape engraved on the biscuits. The little ones tried to do it sometimes with their hands at other times, eating only the external part of the biscuit, leaving the shape intact. If they succeeded, they would get another Dalgona from the seller for free.

It's not that difficult to cut out this cookie, you think, actually it is. In fact, Dalgona is very crumbly and breaks easily. In addition, since we are in Squid Game, and not at the exit of a school, the consequences for those who make mistakes are extreme.

The return of the popularity of Dalgona, due to the series, is also leading to rediscovering the recipe and many on social media post photos and videos of their attempts to perfectly cut out the cookies.

How to prepare Dalgona

Are you curious to try a Dalgona? You can prepare it at home in a very simple way with only 2 ingredients: sugar and bicarbonate.

Melt 2 tablespoons of sugar in a saucepan, once it becomes caramel, add a pinch of baking soda and continue stirring. Pour everything onto a piece of baking paper and mash the caramel obtained with the help of the bottom of a saucepan or with a container, giving it a flattened and round shape.

Then decide the figure you want to put on the biscuit and use a mold to imprint it in the center. Let the Dalgona harden and once it is cold try to cut it out!

All the benefits of the fasting-mimicking diet ❯