What do the shape and color of your lips say about you?

What do the lips tell us about an individual's personality? Lipsology explains it

Tell me that you have lips and I will reveal to you who you are: the "lipsology" promises it, an (American) art of reading the shape of the lips to obtain indications on aspects of an individual's personality and its levels of vitality. For those who want to understand what their lips say, man or woman, it doesn't matter in this case, here is a quick do-it-yourself test: apply a good dose of lipstick, then print a kiss on a white sheet. What is the result?


Jilly Eddy - Lipsology expert - suggests that i overall blurred contours, like a wave, they reveal an artistic attitude. If, despite the lipstick, the color left on the sheet is a little faded: be careful, tiredness is important at this moment.

Who has lips neither too thin nor too full tends to have balanced relationships; the artificially voluptuous upper lip (in short, that he has received a little help) indicates the need for reassurance, to be supported, to receive consent. In relationships he can turn out to be a person who tends to throw things into the dramatic, to get attention. On the contrary if it is naturally fuller than the lower one indicates a person generous in giving to others.

Who has softer and abundant the lower lip he wants to be pampered and loves to enjoy the pleasures of life. Both thin lips they are typical of people who are a little more solitary, less “caciarone”: they are comfortable in relationships but in a different way from those with full lips.

On the other hand, those who have a barely hinted upper lip and a normal lower lip tend to consider work and career in the first place and - in general - have an "alpha personality" (according to John Haner, expert in lip reading, this setup would be the most common among men: present in 60% of cases).

And what about thecupid's bow, the central part of the upper lip? Well designed it is that of good communicators, also quick to say (which sometimes can make people speak too quickly and in an unkind way). L'soft arch, rounded, reveals a gentle, compassionate disposition. When, almost, there is not (you know the lips of Julia Roberts?) the person can be too attentive to others, so much so that he loses a little care and attention to himself. A kind of cupid's bow (but on the imprint of the lower lip) is instead typical of those who are romantic. 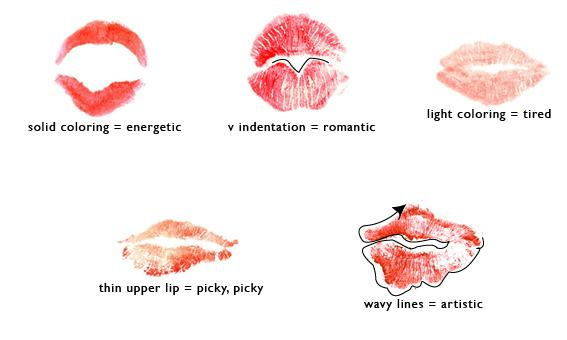 Finally, a curiosity: according to a study conducted in Manchester, the lips are there most interesting feature of the face of women. And if above they have a Red lipstick, the attraction increases even more: at the moment of the meeting, the first 7,3 seconds of a man's gaze cannot break away from there. From that red, let's say (there is a reason: it mimics the vasodilation typical of sexual arousal). The lipstick does its part in any case: if it's pink, it is true that it retains only "6,7" of the first 10 seconds of a match. But if it's not there, the male attention on the lips is reduced by almost two seconds.

And what about the male lips? Here the opposite reasoning applies. In other words: the less red color there is on a man's face, the more manly he is perceived. Just to point it out.

Whatever the color, regardless of the attention of others you want to attract, and beyond what they reveal about aptitudes and temperament, the lips retain a subtle charm, to seal the said and the unspoken. They are the door of material nourishment and of the more spiritual nourishment of the word, which is sound and can become creation or hell. Things like that. On the lips and in thought.

What do your hands say about your health? ❯

add a comment of What do the shape and color of your lips say about you?