Popcorn: Microwaved ones are bad for your health 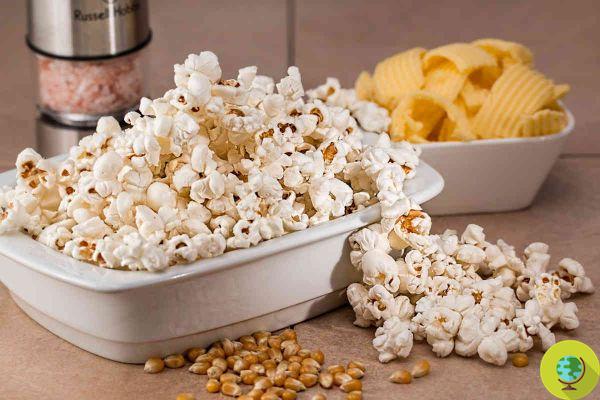 What would a movie be without popcorn? The stainless duo was formed more than a century ago, with the birth of the first films and one of the most popular savory snacks at the same time. But are microwaved ones really safe?

What would a film be without the pop corn? The stainless duo was formed more than a century ago, with the birth of the first films and one of the most popular savory snacks at the same time. The production of popcorn on a large scale has evolved over time, reaching in recent years the creation of packs of popcorn to be cooked in the microwave in a few minutes. Popcorn prepared in this way are they really safe?

Neglecting for a moment the fact that preparing popcorn in the microwave does not guarantee a real saving of time - in case you are aiming at it - since their preparation in the pan starting from the corn kernels and with the use of a simple drizzle of oil it is just as quick, it is essential to ask yourself what the real content popcorn packs designed for microwave cooking and whether their consumption is to be considered healthy.

It is enough to try to deepen the question to realize the possible presence of unwanted additives inside the popcorn packs, among the ingredients or in their wrapping, as unfortunately not infrequently happens in the case of some packaged foods of industrial production.

Il diacetile ("Dyacetil" in the English name) has been used for years - and still is - as a flavoring to give "Butter flavoring" packaged popcorn intended for microwave cooking and other foods, such as cookies. Diacetyl can be derived from alcoholic fermentation and can be a by-product of beer and wine production.

To rekindle the spotlight on this substance is a recent research conducted at the University of Minnesota, published on the pages of the scientific journal "Chemical Research in Toxicology", through which it was highlighted that diacetyl has a structure similar to those of other substances considered responsible for the formation of cerebral plaques that lead to the onset of Alzheimer's disease.

The presence of diacetyl in the food in question and in the factories where its production takes place has unfortunately already caused the onset of a further disturbance, called "bronchiolitis obliterans", from which both regular and numerous popcorn users have been affected in the United States involved in their production. Some US factories would therefore have decided to replace diacetyl with other flavoring additives, the real health of which is still questionable, so much so that the Food and Drug Administration would consider them "innocent until proven otherwise".

Another problem with popcorn intended for microwave cooking appears to be related to theirs packaging envelope. Some packages of the aforementioned popcorn would in fact be manufactured with the use of PFOA, a chemical additive that has been linked to the onset of cancer through animal studies. It has also recently been associated with a reduced response of children to vaccineswhich would put them at greater risk of infection.

Although that component has not yet been declared a human carcinogen, its presence would have been detected in the blood of 95% of Americans. It therefore appears as a more than appropriate choice to give up in advance the consumption of microwave popcorn, returning to their traditional preparation which is able to make them even tastier and less harmful to health.

Chocolate popcorn: how to prepare them at home ❯

add a comment of Popcorn: Microwaved ones are bad for your health