If you play drums, your brain performs above average 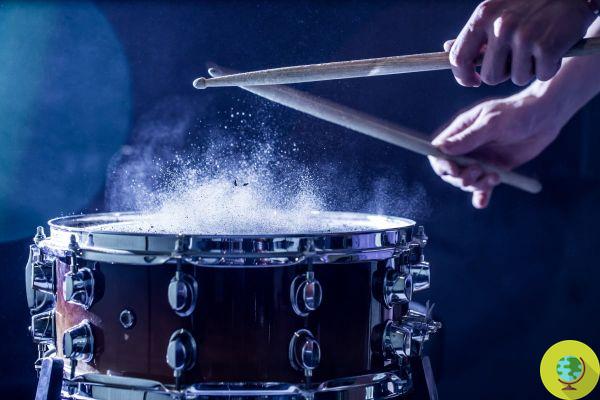 If you play drums, your brain works better than others, German research published in the journal Brain and Behavior has shown.

And if play drums stimulate the brain? According to a German research conducted by the Bergmannsheil University Clinic and the Ruhr University this is exactly the case. Because the brain of the drummers, according to the results of the study, is more performing than the average.


It would take just one year of practice to improve the way in which the right and left parts of the brain communicate with each other, it is well known how important coordination is to play the drums.

The researchers, who published the study in the scientific journal Brain and Behavior, achieved these results by examining 20 professional drummers with about 17 years of practice, who played about 10 and a half hours each week, and 24 other musicians.

Participants underwent magnetic resonance imaging while playing the various instruments, and the reaction of the corpus callosum located under the cerebral cortex, which connects the lobes ensuring communication and coordination between the two hemispheres, whose anterior part is responsible, was analyzed. of motor planning.

They thus found that the corpus callosum of drummers is much more stimulated than that of other musicians, and that although its fibers are fewer in number than the average, they are thicker, and therefore capable of transmitting information more quickly.

Already another study published in the Journal of the American Academy of Child & Adoloscent Psychiatry had highlighted that learning to play a musical instrument is useful in the brain because on the one hand it improves the coordination of movements, on the other it determines a cortical enlargement in the related brain areas. executive functioning, inhibitory control and emotion processing.

And yet another highlighted the benefits of the piano, which helps improve brain skills by making pianists tend to be better at problem solving, more creative and able to do tasks at the same time.

Now it is added to the list battery, funny but also "smart"!

If your hair falls out, it's the smog's fault: new research reveals it ❯

add a comment of If you play drums, your brain performs above average