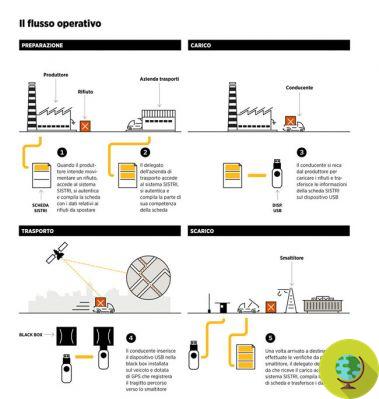 New tests for Sistri, the waste traceability system. Three days in which it will be tested again, 23, 24 and 25 November

The functionality of the Sistri system, the new telematic waste traceability system which, barring further complications, should enter into force by February 2012, will be tested again on 23, 24 and 25 November.


Previously, the former Minister of the Environment Stefania Prestigiacomo had denied, with a note, the presence of further problems, guaranteeing the regular continuation of the tests scheduled by the end of the year. However, some carrier associations, including Asstri, adhering to Conftransport , had refused to participate in the trials, complaining that the Minister did not accept their requests, requests aimed above all at simplifying the procedures for companies.

But the associations had also asked, as in the case of Legacoop, Confcooperative and Agci, whether they were reimbursed the contributions already paid by the transporters for the previous year. "Several companies have sent us the data on the sums that have been paid up to now for obligations resulting from the system - Legacoop, Confcooperative and Agci had made known - these are, on the whole, very substantial figures, which in years of difficulty such as the ones we are experiencing have a heavy impact on budgets and risk having indirect negative effects on the employment level ”.

The same associations, then, had even feared the risk, in the event that the problems of Sistri had not been resolved, that the road transport system of waste went haywire at the time of the expected entry into force of the Sistri , next February 9th.

This time, however, a certain unity of purpose seems to have been found and the Ministry of the Environment spread the news of a new experiment in collaboration with the most representative trade associations. On 23 and 24 November the test will be dedicated to producers of special waste with over 10 employees, to transport companies and to management plants. The 25 Novemberinstead, the test will be dedicated to the municipal waste supply chain of the Campania Region. The test scheduled for 23 and 24 and 25 November will cover all subjects who must respect the departure date of February 9, 2012. Overall, these are about 73.000 producers, 20.000 transporters, 10.000 plants and 551 Municipalities, entities and companies that manage municipal waste in the Campania Region.

Later the test for business which have up to ten employees, for which the entry into force of the Sistri is expected after 1 June 2012.

“To participate in the tests and ensure an effective return of the experience gained - advises the Ministry - it is important that operators prepare themselves by consulting the SISTRI Portal - www.sistri.com - and in particular the 'Quick Guides' Manuals. It is essential to use the online service (Company Management) in the authenticated area that allows you to modify or integrate the information relating to your profile provided during registration and to use the application for updating the USB device software during authentication to SISTRI system. In any case, it is always possible to contact the SISTRI Contact Center for any information, clarification and operational support at the following contacts: toll-free number 800003836, e-mail box supportotecnico@sistri.com. "

Sistri: the definitive stop in the next development decree ❯

add a comment of Sistri: new tests in the coming days