In breast milk, breast cells are still alive and can help in breast cancer research

The study compared excreted breast cells with the breastfeeding process and cells from women who did not breastfeed.

Breastfeeding is good not only for the baby but also for the mother. As already shown by some studies, breastfeeding performs a protective function against the development of breast cancers. But why does this happen? Breast cancer is a transversal disease, which affects women of different ages and in various forms: it is therefore difficult to determine a stable and concrete relationship between breastfeeding and the development of the disease. However, new research has tried to answer this question.


The researchers analyzed some breast cells inside the breast, which are generally excreted with milk, to better understand how breastfeeding can also be good for the mother's health. It turned out that there are different cells in a breast that is breastfeeding than in a breast that has not breastfed: Hormonal changes, which occur in these cells, may hide an answer as to why cancer affects some women and not others. (Also read: Breastfeeding is better, no matter what the commercials say!)

The researchers looked at the breast cells present in the milk of nine women who breast-fed for less than 12 months and conducted a genetic analysis on these. The results were then compared with those relating to the breast cells of some women who underwent breast reduction surgery for aesthetic reasons. 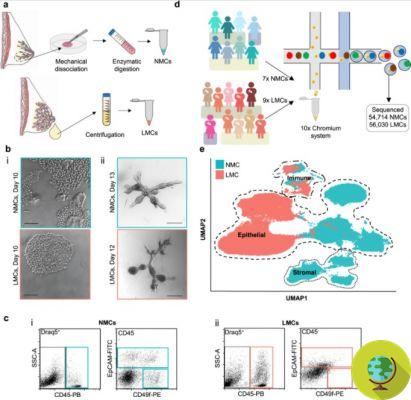 Comparing the two types of cells, it emerged that some genes increase their expression during the lactation phase - in particular those related to the metabolism and storage of fatty acids, but also to the immune response and the transport of substances such as zinc. But not only that: the observation also made it possible to identify two distinct cellular populations responsible for the production of milk in breastfeeding women.

Further studies will be needed to understand how this differentiation in breast cells can affect a woman's future health, but certainly this first step is very important. The researchers now intend to focus their studies on understanding how the woman's body changes after the onset of a second (or even a third) pregnancy: analyzing breast milk samples from the same woman, collected at different times in her life, could reveal more information on the correlation between breastfeeding and cancer prevention.

The "Bank of wigs" was born in Lazio for cancer patients ❯

add a comment of In breast milk, breast cells are still alive and can help in breast cancer research