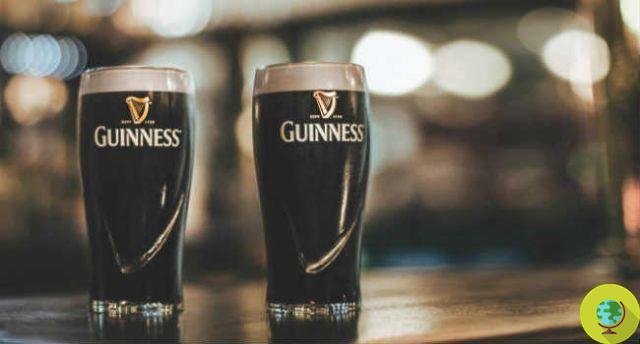 Guinness has officially gone vegan and says goodbye to the isinglass that has always been used in the recipe, to clarify the beer and clean it of any deposits. So welcome to the 100% vegan friendly Guiness.

Guinness has officially become vegan and says goodbye to gelatine always used in the recipe, to clarify beer and clean it of any deposits. So welcome to Guiness 100% vegan friendly.


We had already talked about the announcement made by the Irish company in 2015 that after 256 years, it had embarked on the road of change, to become a drink suitable for all and those many vegetarian and vegan forced to give up dark beer.

The different production method has already been started, but we have to wait a few more months to complete the certification process typical of Guinness products, in the meantime something has already moved.

There is no longer, for example, isinglass in the barrels intended for pubs and restaurants, the beers produced in are vegan Australia and all Guinness Blonde American Lager. Bottles and cans they are in the production phase and will be distributed by the end of the year.

Isinglass was used in the beer mixing phase or better in the filtering where the gelatinous substance was used to remove impurities and ensure a good color.

But if two hundred years ago this method seemed to have no possibility of change, today Guinness opens its doors to whom He complained of not being able to drink a glass of dark beer every now and then.

Then, the whole transformation process and the excellent repercussions on the environment of one are explained good choice. Every day, approx 10 million glasses of Guinness are consumed, let's think about how many fish will be saved. A breath of oxygen for the marine ecosystem.

To all those who complain: 'And no, even the vegan beer now', the company explains:

'The recipe has not been changed and it is precisely for this reason that we have been working for years to find an alternative that did not transform the flavor or quality of the beer '.

In short, a great victory for everyone!

Labyrinthitis, to intervene on the symptoms it is useful to rely on natural remedies ❯

add a comment of Guinness goes vegan, now it's official!