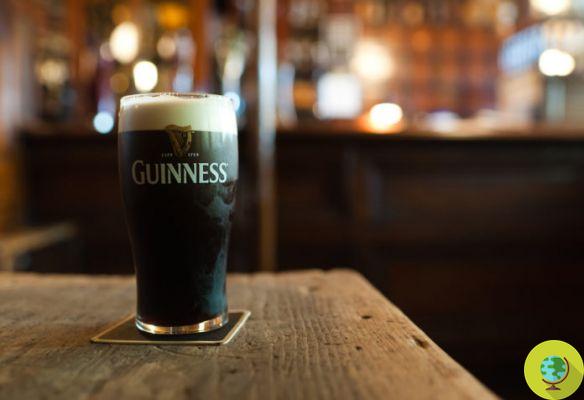 It's official. Guinness goes vegan. The most famous dark beer in the world says goodbye to the ingredients of animal origin used for filtering the drink. No more isinglass and so the drink will now be suitable for both vegetarians and vegans.

It's official. There Guinness becomes vegan. The most famous dark beer in the world says goodbye to the ingredients of animal origin used for filtering the drink. Nothing more gelatine and so the beer will now be suitable for both vegetarians and vegans.

The company revealed this to the Times for the happiness of vegetarians and vegans from all over the world who do not want to give up a glass of dark beer from time to time. The revolution takes place after a good 256 years of company history. A sign that change is always possible.

Guinness he is working hard to improve his beer and so he wanted to make known the willingness to use a new vegan-friendly filter system. For years, the company has used "glue" of animal origin obtained from the swim bladder of fish for the filtration of beers.

The problem is that traces of isinglass can remain in the drink as a finished product due to the filtration process. This is why up until now the stout beer produced by Guinness was not considered a drink suitable for vegetarians and vegans.

The new vegan friendly method for the production of Guinness beer will be introduced in 2016. The company has finally decided to adopt some alternatives to isinglass that respect animals, such asagar, pectin and carrageenan.

Are you sure that the beer you usually order is suitable for vegetarians and vegans and does not contain isinglass? You can check and discover the birre veg-friendly on the database of Barnivore.

BEER: 10 WAYS TO USE IT LIKE YOU NEVER THOUGHT

ADVANCED BEER: 3 VEGAN RECIPES TO REUSE IN THE KITCHEN

The law of the mirror: what you see in others is your reflection ❯

add a comment of Guinness goes vegan: goodbye to isinglass in beer production