E-cigarettes: the side effect of toxins on vision in a new study 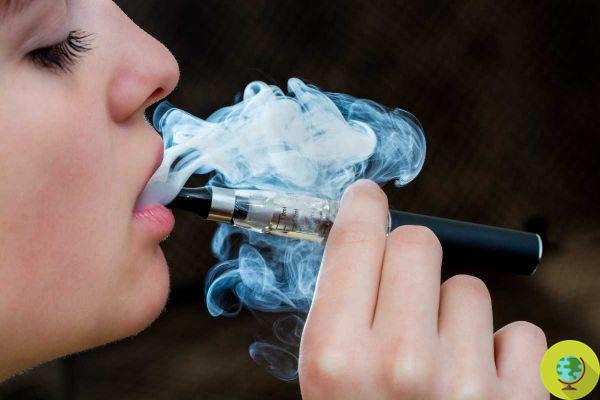 E-cigarettes have risks including, according to a new study, an increased likelihood of developing vision problems

There continues to be discussion of the possible harmful effects of e-cigarettes that many consumers use instead of more traditional ones. Over the years, several critical issues have emerged about these devices but now a new study adds an important element: the toxins released by electronic cigarettes could damage the eyesight of those who use them.

For a long time it was thought that e-smokes were a valid alternative to the more classic cigarettes. Then, little by little, various scientific researches have highlighted some not exactly reassuring aspects of these devices.

Among other things, smoking is known to harm the eyes, and a research team wanted to investigate whether e-cigarettes may also have the same disadvantage. To find out, a team from the University of California sampled 1.173.646 adults in the United States between the ages of 18 and 50 who were asked if they had ever smoked or used e-cigarettes and if they had any vision problems.

Analyzing the data it turned out that e-smoke users were 34% more likely to suffer from vision problems compared to those who had never tried them, and former "vapers" presented a 14% higher risk.

The results of the study, published in the American Journal of Ophthalmology, are added to others that state that the use of the e-cigarette is not all that risk-free.

But why would this disadvantage for the eyes and sight be verified? Scientists believe that some harmful ingredients present in e-cigarettes, such as propylene glycol, can produce toxic substances for cells, free radicals that would weaken the fluid layer that covers the surface of the eye but also promote oxidative stress, a key factor in the development of chronic diseases, cataracts and glaucoma.

Research shows that cigarette smoking increases the risk of several eye conditions including age-related macular degeneration but in reality it is not entirely clear how e-cigarettes would present the same risk.

Professor Simon Capewell, a clinical epidemiologist at the University of Liverpool, said the study did not actually prove a link between vaping and eye damage. Therefore, further confirmatory research will be needed to understand if this is really the case.

Electronic cigarettes, long-term side effects discovered: this is how they inflame the brain, heart and colon ❯

add a comment of E-cigarettes: the side effect of toxins on vision in a new study