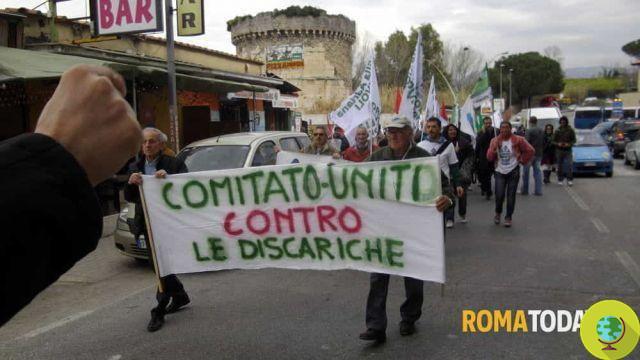 With the hypothesis of a landfill near Riano over, the protests are concentrated among the inhabitants of the new area identified, that of Corcolle, a stone's throw from fundamental archaeological sites of the Roman hinterland such as that of Villa Adriana.

With the hypothesis of a landfill near Riano over, the protests are concentrated among the inhabitants of the new area identified, that of Corcolle, a stone's throw from fundamental archaeological sites of the Roman hinterland such as that of Villa Adriana.


Nobody would ever want one rubbish dump under the house and if this structure is also designed in contrast with the current regulations, then it is at least legitimate to protest. And so continues the struggle of the inhabitants ofarea of ​​Villa Adriana, near Tivoli, who are threatened by the possibility that the landfill that will replace that of Malagrotta.

A landfill that, as always, will not solve the waste problem of the capital and which in fact risks ruining one of the most precious cultural assets of the region, historically and culturally bound and even protected by Unesco.

For this the citizens of Corcolle e Saint Vittorino, the villages concerned, returned to the streets to protest and ask that the governor Polverini withdraw the waste plan and find an alternative solution to garbage management. First a sit-in Saturday morning, in front of the Prefecture, which was attended by 1000 people: "It is an uncivil act to build landfills, ordering them to be disseminated in uncontaminated living and environmental contexts - denounced the Deputy Mayor of Riano Italo Arcuri - In the light of the appeals to the TAR and the technical studies it is madness to continue on an anachronistic, wrong and authoritarian plan ”.

The sit-in was then followed by one today a manifestation has been conducted in via Zagarolese, opposite the entrance to the San Vittorino site: "We want to show our presence to the technicians who this morning started the surveys ordered by the Prefect - explained the president of the "Zero Waste" committee Francesco Saltini - we remain vigilant, because that site, among the eight eligible candidates, was and remains the most unsuitable: San Vittorino is a village prior to one thousand, protected by historical and environmental constraints ".

"It is useless to create further alarmism, it is not certain that the landfill will take place - argues the president of the VIII Municipality, Massimiliano Lorenzotti (Pdl) - I await the outcome of the withdrawals before saying anything else". But the reassurances do not take hold and the citizens do not give up: "We will return to the square also next Saturday - announced Vincenzo Bretti, vice president of the" Giardini di Corcolle "Committee - we will organize a large demonstration, a procession that will start from the discount store on via Prenestina Polense and will reach the entrance to the landfill, and we are also ready to block traffic".

The new landfill could arise in the area of ​​the wonderful archaeological excavations of Villa Adriana epfor these reasons also the WWF he lashes out against this decision, presenting in recent days, together with FAI, for an appeal to the Lazio Regional Administrative Court on the appointment of a "commissioner for overcoming the environmental emergency in Rome and the Province". Systematically resorting to emergencies, explains WWF, delegitimizes the functions normally entrusted to local authorities and encourages them not to find lasting solutions for the waste problem. “In the absence of adequate sites of composting and a serious one collection door to door in the capital - reads the press release - it is also legitimate to ask oneself what answers can be given by a commissioner destined exclusively to manage the disposal ".

In short, landfills are not the most suitable solution, much less if they are built near inhabited centers and historical and cultural heritage. Is it possible that a sustainable and lasting alternative cannot be found?

add a comment of Waste emergency Rome: new protests against the landfill a stone's throw from Villa Adriana