Historical law in Argentina: salmon farms banned. It is the first country in the world 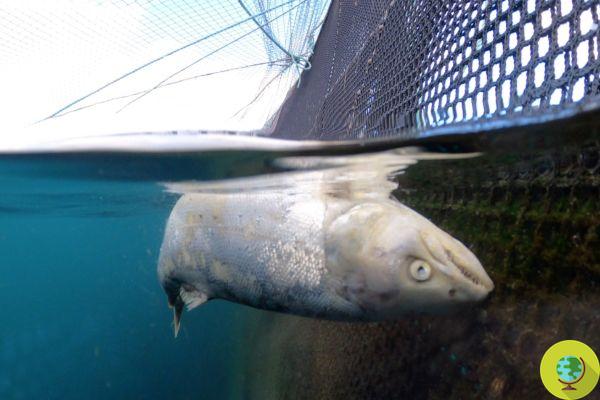 No more salmon farms in Tierra del Fuego Argentina. A law has been passed that prohibits them considering them as a threat to environmental sustainability.


As several surveys have shown over the past few years, salmon farms are horrifying places where fish live in tremendous suffering. (Read also: International Sushi Day: All the Atrocities That Lurk Behind the Salmon That Gets Inside).

But that's not all, these farms, in addition to being cruel, also have a strong environmental impact. In fact, they contain plastic waste, iron, nets, chemicals, antibiotics and thousands of dead fish that end up in the sea.

But there is a place that has decided to put an end to all these atrocities. The legislature of the southern province of Tierra del Fuego in Argentina unanimously approved a law banning "all salmonid cultivation and production" in the marine waters and lakes of Tierra del Fuego.

The objective of the new provision is:

In the considerations of the law it is recalled that salmon is a species foreign to the ecosystem of this territory and that its appearance would dramatically unbalance the marine environment. These farms could generate viral, bacterial or parasitic diseases foreign to the area and the use of antibiotics would create many problems for the environment.

Argentina thus becomes the first country in the world to ban salmon farming. The South American state has in fact ruled definitively against the intensive practice of fishing and the Beagle Channel, in which this is now prohibited, is in fact the only suitable area in the whole country.

The story began in 2018 when the South American state signed an aquaculture cooperation agreement with Norway, highlighting the feasibility study of the waters of the Tierra del Fuego Beagle Channel for the development of a salmon farm.

The feasibility studies have determined the points in which the breeding could have been carried out, but immediately the environmental organizations began to mobilize for a law that prohibited the activity in the province, which a few days ago was actually sanctioned.

Chile is now expected to "act accordingly" because the Beagle Channel is the same and requires protection from the Chilean side as well.

Read all of our articles on salmon.

Reading stories makes you a better person. Here because ❯

add a comment of Historical law in Argentina: salmon farms banned. It is the first country in the world