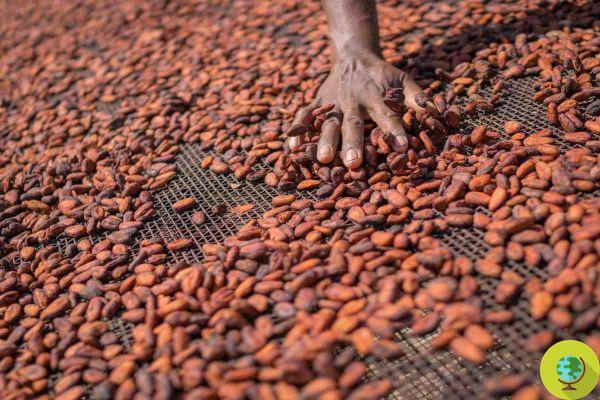 Electricity from cocoa waste to power villages without access to the grid: the technology, developed by the University of Nottingham, produces biodiesel that promises to bring light to communities that currently lack (and to strengthen the cocoa economy)

Electricity from cocoa waste to power villages without access to the grid: the technology, developed by the University of Nottingham, produces biodiesel that promises to bring light to communities that currently lack it (and to strengthen the cocoa economy).


Bio Rural Energy Scheme, this is the name of the project, uses the shells of cocoa beans currently underutilized, indeed often real waste, which however, according to this study, could be exploited to generate electricity and bring it right where there is none. .

The mechanism starts from the characterization of four different types of cocoa pods commonly grown in six regions of Ghana for their use as biofuel, then the insertion of the waste shells into a gasification system, which includes a gasifier, a 5kWe diesel generator, a solar dryer and an architecture that produces pellets (biodiesel usually generated from organic matter or biomass), from unit cost of approx 45000 €.

"Ghana is the second largest cocoa producer in the world and every ton of cocoa beans harvested generates 10 tons of pod shells - Jo Darkwa explains, study co-author - In the past, this waste material was underused ”.

“However, feasibility studies indicate that cocoa pod shells could be converted into valuable biofuels, an important energy supply for the rural areas that currently have only 15 percent of electrical coverage. If successful, this new bioenergy infrastructure would support the Ghanaian government's goal of universal access to electricity by 2030 ”.

The project is supported by the British government and appears to be a laudable initiative aimed at recycling. But the cocoa industry is generally not famous for its sustainability, neither environmental nor social, often generating deforestation and exploitation of child labor.

The cocoa used by multinationals such as Mars, Mondelez and Nestlé is in fact putting the rainforest of the Ivory Coast at serious risk, as is emerged from an investigation by 'The Guardian'. I am also sadly noti (and often forgotten) the child slaves who are used to bring chocolate to our tables.

However, the development of guidelines for large-scale bioenergy generation and theirs is also foreseen in the researchers' program integration into rural communities, as well as surveys on the perceptions of who would benefit from the project, the development of cooperative communities and governance structures for cocoa-producing regions.

And in general, according to the researchers' estimates, the initiative would also lead many local jobs generated by the collection and transport, treatment, storage and processing of this potentially profitable by-product, promising to become a model of community energy cooperation that aims to reduce poverty.

Furthermore, the population of Ghana, now 30 million, is growing rapidly and around 80% of households in the country use wood as the main source of fuel for cooking and heating water, creating severe pressure on the forests. If used wisely, this technology should therefore reduce the use of virgin wood, bringing electricity from waste materials and thus helping to mitigate the climate changes.

We therefore hope that the Bio Rural Energy Scheme will not be used as a lever to increase production, exploiting the work and deforesting other hectares of our precious forests.