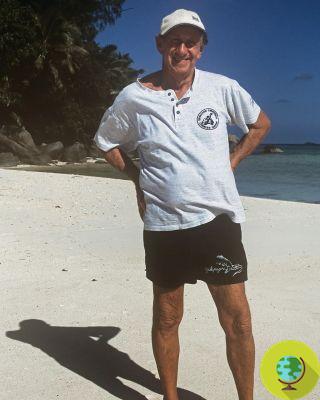 He was nicknamed the "new Robinson Crusoe" for having spent his entire life safeguarding the fauna and flora of his island.


Brandon Grimshaw was then a new 40 year old when he decided to completely change his life as a journalist and devote himself to nature. After a pleasure trip in the summer of 1962 the English bought the small abandoned islet of Moyenne for the modest sum of 8.000 pounds, one of the 115 islands of the Seychelles archipelago located along the northern coast.

The paradisiacal beaches of Moyenne and unspoiled nature appeared in Grimshaw's eyes as the perfect place to start over and experience a new phase, but the islet was still abandoned and the interventions to be made to redevelop it were endless. In addition, the fate of Moyenne seemed to be already marked and threatened by the tourist boom that was affecting the adjacent islands of the archipelago and that would have transformed it into resorts and villages.

So it was that Grimshaw, thanks also to the deep friendship that he formed with Rene Antoine Lafortune, the son of a local fisherman, began to transform his Moyenne to make it a naturalistic park.

The two planted over 16.000 trees of mango, papaya, mahogany and palm which over time have attracted many species of birds as well as Aldabra giant tortoises, an endangered species of which today there are about 50 only on the island of Grimshaw. Brandon and Rene continued tending the island relentlessly, but unlike the fisherman's son, Grimshaw permanently resided there and has never left Moyenne from the moment he first set foot there.

In 2009, two years after Rene's disappearance, Brandon Grimshaw signed an agreement with the Seychelles government that included Moyenne in the protected national park of Ste. Anne Marine Park and thus the island acquired the status of Middle Island National Park, the smallest national park in the world. Although tiny, according to one estimate, Moyenne Island would have more plant species per square meter than any other national park in the world.

Over the years Grimshaw has received offers from foreign tycoons, eager to buy the island, but has always rejected them to protect the tropical paradise he built from scratch with his own hands. In 2012 Brandon Grimshaw passed away and in his will he expressed his desire to keep the island of Moyenne

as a place of prayer, peace, tranquility, relaxation and knowledge for Seychelles and overseas visitors of all nationalities, colors and creeds

add a comment of Brandon Grimshaw, the man who single-handedly built a nature reserve to save endangered species