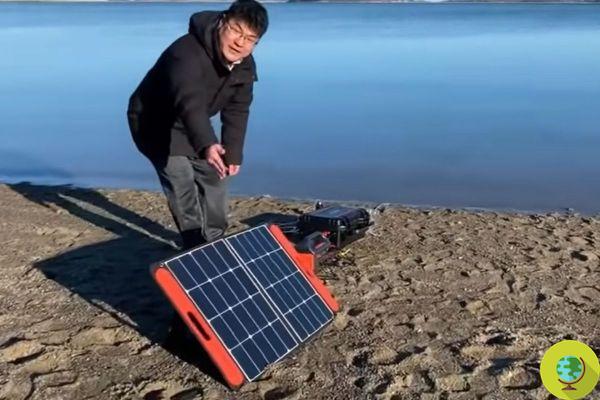 Simply press a button to transform seawater into ready-to-drink water in a simple and economical way: an answer to the problem of drought

Water is one of the most precious natural resources and most threatened by climate change and by the indiscriminate exploitation committed by us human beings: as foreseen by a United Nations report recently published, in the coming years more and more areas of the planet will be affected by drought and desertification phenomena, and a third of the world population may no longer have access to water resources.


Based on these catastrophic forecasts, it is necessary to rethink the way we approach water and develop new strategies to allow populations living in desert areas to be able to take advantage of this precious resource.

In this perspective, a futuristic project developed by researchers at the Massachusetts Institute of Technology (MIT): a portable desalination unit, weighing less than 10 kilograms, capable of removing particles and salts to generate drinking water and that could make it usable for humans sea ​​water.

The device is the size of a suitcase, it requires less energy to work than a smartphone charger and can also be recharged thanks to a small solar panel (which can also be purchased online at a cost of about $ 50). A negligible expense and energy expenditure, if you consider that this appliance is able to offer water with higher quality standards than those set by the World Health Organization.

(Read also: 5 billion people may no longer have access to water in 2050, according to the United Nations)

The simple and affordable technology could allow for a variety of uses - from small communities living on sea coasts to merchant ships that travel long distances at sea, from military bases where long-term operations are carried out to refugee camps hosting refugees and people fleeing conflict and natural disasters.

We have been working for ten long years on the physics behind the individual desalination processes, but to put all these advances in a box, build a system and demonstrate it in the ocean, has been a truly meaningful and rewarding experience for me - he proudly states. Jongyoon Han, one of the inventors of the revolutionary project.

Unlike other portable desalination units that require water to pass through filters, the MIT device uses electricity to remove salt particles from the water and make it drinkable: this allows to reduce waste associated with the use of the water. device (there are no filters to replace and dispose of) and maintenance costs in the long run.

After carrying out the first laboratory experiments using water with different levels of salinity and turbidity, the researchers carried out tests on the beach (precisely in Carson Beach, Boston) to verify the proper functioning of the purifier in contact with sea water. The result was shocking: in just half an hour, the device had filled an entire glass with clear, drinkable water.

Unsafe water is more lethal than bullets for children

Ooho! Transparent and edible water packaging is on the market (VIDEO)

The advertising billboard that produces drinking water from the air

Alcantara dies with all its fish: Sicily no longer has its river

A make-up remover wipe to save water? Neutrogena's slip that tastes like greenwashing