Food rich in fiber and protein, sacred food for American Indians, it looks like rice, but it is not. It is the aquatic zizania, a cereal that grows spontaneously in marshes, marshy areas and on the banks of slow-flowing watercourses.

Food very rich in fiber and protein, food sacred to American Indians, looks like rice, but it isn't. And the aquatic weeds, a cereal that grows spontaneously in marshes, marshy areas and on the banks of slow-flowing watercourses.

With an intense and wild flavor, with aromatic notes reminiscent of hazelnut or chestnut, zizania is still little known in Europe.

In fact, it is mainly grown in Canada and in the Atlantic and northern areas of the United States, since, unlike rice, which grows in warm climates at almost constant temperatures, the zizania prefers cooler or even harsh temperatures.

From a botanical point of view, the zizania genus belongs to the large family of grasses, which includes many cereals including rice. The variety intended for food use is Zizania Palustris. 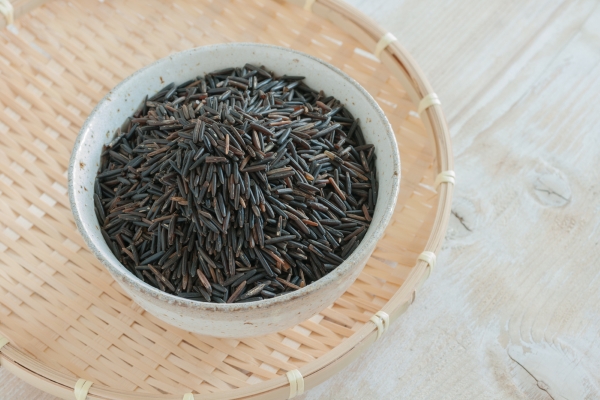 It is very rich in fiber and trace elements such as zinc, potassium, phosphorus and magnesium, as well as vitamins belonging to group b. It provides a low intake of lipids, making it easily digestible. By virtue of its nutritional characteristics, zizania is a cereals particularly suitable for increasing the immune defenses, to combat states of stress, in low-fat diets and in sports nutrition.

It has a low carbohydrate content and a very high protein percentage, equal to double that of rice (13mg x 100gr).

With an exotic appearance and a very strong flavor, which as mentioned is somewhat reminiscent of hazelnut or chestnut, it is a very versatile food in the kitchen: it can be used as the main ingredient in soups, in salads or baked pies.

In the packaged mixes that we find on the market, it is often found combined with other varieties of rice, especially red or wholemeal. Cooking is much longer than that of classic rice, requiring dai 45 to 60 minutes. The times can be reduced to just 20 minutes with a preventive soak lasting 4/6 hours. The zizania will be cooked when the grains open, showing the white pulp inside them.

In summary, the aquatic weed:

The history of this plant is very interesting. It was the main food of some American Indian tribes, in particular those settled in the area of ​​the great lakes, between the United States and Canada: Ontario, Manitoba, Wisconsin, Michigan and Minnesota. There, in those endless plains scattered with many bodies of water, the zizania grew spontaneously. Having noticed that the ducks fed on its seeds, the Indians thought that the kernels could also be edible for humans.

Since the zizania grows in areas swampy and marshy, they thought of using the canoes to collect it. Legend has it that canoes were invented by Native Americans precisely to make it easier to collect zizania. Soon they made this tasty and fragrant rice the basic food of their diet, considering it a real gift from Mother Earth. For these tribes, the zizania harvest was a real one ritual which symbolically consecrated their very deep bond with nature. 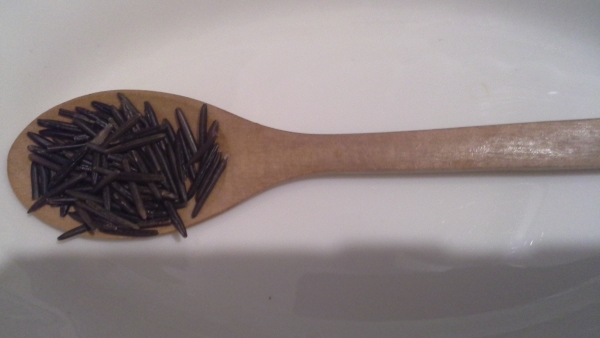 Fortunately i culture methods they remained unchanged even today. By the will of the Canadian state, the zizania is collected as in the past, in a completely artisanal way through the use of canoes. The "biological" character of this food has therefore been preserved, without distorting it through mechanization or the introduction of intensive cultivation methods.

Even today, the ears are divided into bundles and, by folding them, they are pulled towards the inside of the boat, where they beat each other with a stick, making the grains fall directly into the canoe. During this operation, some grains fall back into the ground, to favor a sort of re-sowing.

Being a plant that tends to spontaneously spread its seeds, the beating must be light, since the grain tends to come out easily from the ear. Once harvested, the grains are still soaked in water, so they are heated over the wood fire, thus acquiring the characteristic aroma and brown color.

At this point, the grains it does not require polishing or hulling and can be marketed. As the grain is practically intact, it keeps all the proteins and other nutritional principles intact.

The zizania species, as mentioned, is mainly cultivated in Canada and in the Atlantic areas of the United States, but there is also a variety widespread in China, in particular in the Manchurian region (Zizania Latifolia, botanical name of the Manchurian Wild Rice). Here, however, the food use of the plant is very limited. It is preferred to use it for ornamental purposes, for the decoration of ponds and streams in private gardens.

In recent years, zizania has also been introduced in other countries, such as New Zealand and Hungary. Niche productions have also been started in French Camargue and in the Piedmont and Lombardy rice fields. But these are very limited productions at the moment.

A curiosity concerning the name of the plant: we are led to attribute to the zizania a negative connotation, of a weed and harmful plant. This meaning, now in common use, derives from the parable of the weeds contained in the Gospels of Matthew and Thomas, which tells of an enemy who sowed discord in a man's field, with the aim of ruining his crop, contaminating the "good seed" with the evil one of the weeds.

In fact, the weeds are aweed grass, capable of damaging the harvest and therefore dislikes all farmers. Hence, the translated use of the expression "sowing discord" to indicate the action of creating contrasts and hostility between people. But the weeds mentioned in the Gospels are not the aquatic weeds at all, but the chaff, a plant belonging to the same large family, but belonging to another genus. Furthermore, the aquatic zizania is native to the American continent and it is impossible that it was widespread in Palestine at the time.

Given the beneficial properties of this plant, aquatic weeds are the only weeds that are really worth sowing.

Wild rice is suitable for celiacs

Just like rice, zizania is gluten-free and therefore suitable for people suffering from celiac disease.

Read also: 8 cereals (or presumed so) that even celiacs can eat

Zizania acquatica, where to find it and how much wild rice costs

It is available in organic shops and fair trade shops.

The only drawback is the price: very high indeed.

Prepare the vegetable broth first. Take the pumpkin, peel the outer skin and seeds. Cut it into cubes. Peel the potatoes and cut them into cubes too. Take the onion, chop it and let it brown in a pan with olive oil.

Add the pumpkin, potatoes and enough stock to cover the vegetables. Season with salt and pepper and cook for about 30 minutes, gradually adding more broth. When the vegetables are cooked, blend with an immersian mixer, until you get a homogeneous and compact cream.

In the meantime, let's take care of the zizania. The pilaf method is used to cook the rice. First of all, the zizania is rinsed well, then placed in a pan and covered with 2 parts of water. It is left to cook for 40/50 minutes, then, when cooked, the rice is left to rest for a few minutes. The zizania is shelled with a fork and the pumpkin cream is added.

Zika: 15 things you need to know about mosquitoes that transmit the virus ❯

add a comment of Zizania acquatica: properties, recipes and history of wild rice