Your best friend could be the reason you gain weight: study 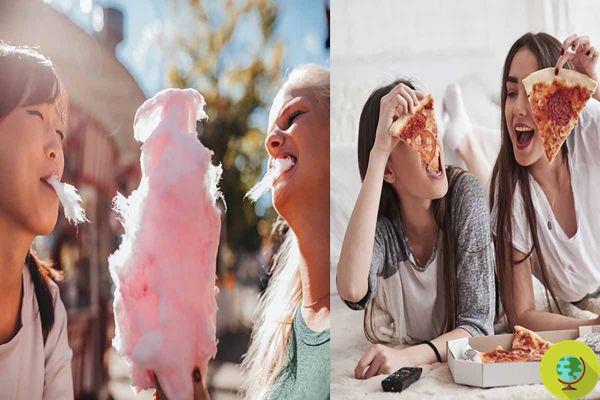 Best friends, you know, share everything and even excess weight could be something you have in common with them. Research claims that the "blame" for your extra pounds is, in some cases, to be found in the people you love most.

Do you have a few extra pounds? It could be your best friend's fault


I best friends, you know, they share everything and even excess weight could be something you have in common with them. Research claims that the "fault" of your extra pounds it would be to be found, in some cases, in the people you love most.

If you have been gaining weight lately, it is very likely that your diet is not flawless or that you are exercising little. But there is another possibility: you could be the victim of a “Social contagion” from one of your best friends or partner.

Supporting this is research conducted by Nicholas Christakis and James Fowler, professors of Medicine at Harvard, and published in the New England Journal of Medicine. Experts are convinced that our habits, as well as the tendency to gain weight, have to do with the influence our closest friends have on us. Practically, you are more likely to gain weight if a close friend, family member, or partner is overweight.

Scholars took a sample 12 thousand adults, monitoring the weight of each and studying their social relationships in parallel. It was found that those who had an overweight or obese best friend had a 57% greater chance of gaining weight. The probability dropped, but was still high, if the fattest person was a sibling (40%) or partner (37%).

But there is more ... even the geographical distance between (real) friends does not limit, for better or for worse, the influence one has on each other. And we are not talking only of emotional bond but also of extra pounds. The study found that it is the emotional distance that does not affect our health. Even a friend who lives far away, even in another state or country, can have a great influence and affect our weight.

It also seems that we are more likely to be influenced by the habits of a person of the same sex because there would be a stronger connection.

But why is there such an influence? According to research the reason we get fat is that by being surrounded by overweight people, we perceive this as normal and we care less about appearances. According to Christakis:

It is important to point out that there is nothing wrong with having curves as long as it is the natural constitution of our body and there is health. In all other cases, it is best to start eating healthily and exercising regularly to regain your ideal weight.

Did the EU really propose to water down the wine? How are things ❯

add a comment of Your best friend could be the reason you gain weight: study