Yogurt: Eating it often reduces the risk of heart attack and cardiovascular disease 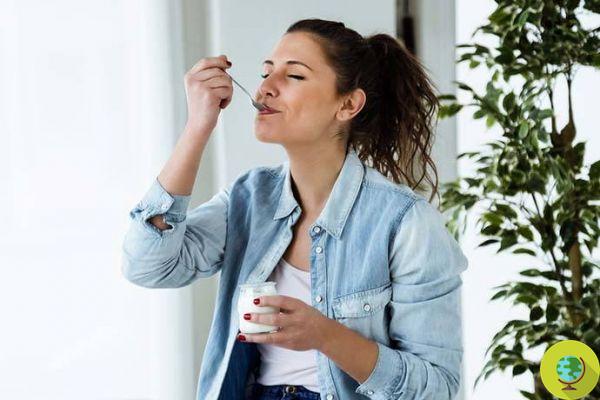 Do you usually eat yogurt often? Well this could be a healthy habit, at least according to new research conducted in the United States that has correlated the consumption of this food with a lower risk of heart attack and cardiovascular disease.

You usually eat often yogurt? Well this could be a healthy habit, at least according to new research conducted in the United States that has correlated the consumption of this food with a lower risk of heart attack and cardiovascular disease.


The study, published in the American Journal of Hypertension, analyzed a large sample of people (55 women between 30 and 55 years and 18 men between 40 and 75 years) all hypertensive or with high blood pressure. Participants were followed up over 30 years.

By analyzing the data collected on the dietary habits of the monitored sample and comparing them with the cardiovascular events incurred by the various people, the experts realized that those who often ate yogurt had a 30% lower risk of being struggling with heart attack, stroke and other related problems. to heart health. However, 30% referred to women while the risk was lowered by 19% in the case of men.

However, both men and women who consumed more than two servings of yogurt per week had a 20% lower risk of developing major coronary heart disease during the monitoring period.

But why this beneficial effect of yogurt?

Justin Buendia, lead author of the study, tried to answer:

“We hypothesized that long-term yogurt intake could reduce the risk of cardiovascular problems as some small previous studies had shown beneficial effects from fermented dairy products. In this work we studied a large cohort of hypertensive men and women who were followed for 30 years. The findings provide important new evidence that yogurt can benefit heart health, either alone or as an integral part of a diet rich in fiber, fruit, vegetables and whole grains. "

It must be said that this is not the first research to highlight the benefits of yogurt on heart health. A review of studies carried out a few years ago had in fact shown how the regular consumption of probiotics, such as those contained in yogurt, helps to keep blood pressure at bay.

But if the secret of the beneficial effect of yogurt really lies in fermentation, perhaps those who consume other foods or drinks of this type could also obtain the same protective effect (find out which are the main fermented foods).

Greek yogurt: all the benefits you don't expect concentrated in one jar ❯

add a comment of Yogurt: Eating it often reduces the risk of heart attack and cardiovascular disease